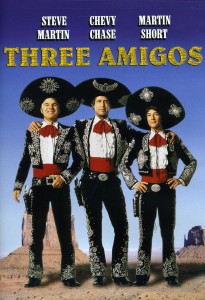 No idea why you snapperheads are smiling.

Steve Martin has aged extremely well, in fact he is the only aspect of Three Amigos! that has not changed dramatically in the past 25 years. When I was in my early teens this was the funniest thing going, but then again I was easily pleased in my early teens.

Steve Martin plays Lucky Day. Chevy Chase is Dusty Bottoms. And Martin Short is Ned Nederlander. I only bother mentioning their names to show the lack of effort involved in this film. This is some of the stuff that we are supposed to find amusing.

This trio of actors from the silent film age became famous as garishly dressed, super suave cowboys, the type who ride in, save the day, kiss the girl and ride out gallantly without a scratch.

In a small oppressed town in Mexico a woman and her son see their exploits on the small screen, and mistakenly assume that the trio are brave cowboys full of valour. Thinking that the three amigos can save them from the constant threat of El Guapo – a man who uses the town for the benefit of he and his many similarly scungy men – the woman sends a telegram to the amigos asking for help.

Coincidentally the telegram arrives scant seconds after the amigos are unceremoniously dumped from Hollywood for their diva-like demands, and thanks to some judicious editing of the telegram content and an unfortunate lack of basic comprehension, off they head for what they think is a high paid personal appearance, and not a dangerous clean up for paid mercenaries.

Creativity over. Which is a shame because we are yet to laugh.

The remaining hour of the film doesn’t know if it wants to go semi-serious or slapstick, so it opts for neither. Therefore the moments that could veer into Naked Gun style tomfoolery are left hanging. The sequences where they could really have used a laugh are teased up a bit but discarded. Call it a case of comedy blue balls, but whatever you call it you’ll have to provide your own punch lines, because there are none here.

Even once the three oblivious idiots realise they are not performers but have unwittingly (and unfunnily) entered a life and death situation, the jokes are not forthcoming. Sure they shed some tears as the awareness hits them, in the only moment that elicited a laugh from me, but then instead of fighting back or even cowering in a moderately amusing manner, they – like the film – run off with their tails between their legs.

Steve Martin plays the film more or less straight, only his surroundings or situation never get ludicrous enough for this to be amusing, Martin Short grins his pixie grin but isn’t given dialogue that can justify us doing the same, and Chevy Chase is a third wheel on a two wheel bike, with only a few lines in the entire film.

And to cap it off, for those of similar vintage who recall the ridiculous 5 step ‘Amigo Salute’ that accompanies their arrival and departure, finishing with a hip thrust; think how tame and unamusing that this seems now…

…then wonder how a film with that as a ‘highlight’ might hold up a quarter century later.

Not pretty is it?

Final Rating – 5.5 / 10. John Landis made some great comedy in the 80s. He also made some shit films too, as evidenced by this one.