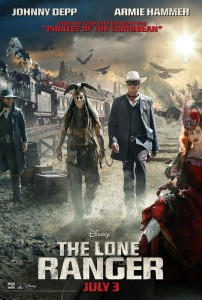 The Lone Ranger overcomes tremendous odds to provide perhaps the least genuine entertainment per dollar this side of Katy Perry in concert. Amazing given the pedigree of the filmmaking team in front of, and behind, the camera.

The film stars neither Johnny Depp as Tonto nor Armie Hammer as the Lone Ranger (he has a name – not important). This is because while Depp rocks the makeup well and throws himself into the task at hand, feeding a dead bird perched on your dome and muttering three of four word lines somewhat sagely isn’t showstopping stuff. At least not here. And Armie Hammer… well let’s just say this won’t be his breakout role.

It sure isn’t the plot that keeps our eyes peeled and our ears straining. A newly deputised lawyer reluctantly teams with a native American to take on a bad guy so very fiendish that I have forgotten almost every character trait or heinous act that he perpetrated. And I only watched the damn film last night.

They ride horses, they run to, from, through and all over trains. They meet one legged hookers, ruthless businessmen, and most awkwardly a young lad in a museum in numerous unnecessary scenes that are interspersed through the film.

Unfortunately for us all it is the CGI that is the star of the show, and while it sure looks expensive it lacks the energy of some of the best moments in the ‘Pirates’ series and the earned silliness of say the Back to the Future trilogy.

I can’t believe how devoid of action it all was,  and  when the credits rolled and I realised that the previous 150 minutes left me with a perplexed expression and an empty confused feeling.

Such a waste of a quarter billion or so.