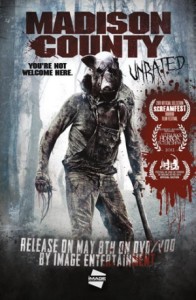 The DVD cover of a drama film normally has the director’s name emblazoned across it. If he has a solid résumé, you’re likely to pick it up.

The DVD cover of an action film normally has the star’s name listed prominently. Statham, Sly, Bruce and Arnie have you considering. Seagal and pretenders have the cover returned to the rack.

The same goes for rom-coms. Only replace Statham & co with Aniston, Clooney and Hudson.

The DVD cover of shitty comedies has whatever tenuous link that exists to align the film with Ferrell or Sandler. ‘From the producers of’ or ‘from the assistant to the key grip’ spring to mind.

Nope. The marketing of almost every crappy cheaply made horror movie is done with a gushing endorsement from one of the 137,000 horror movie websites “deliciously vile” of something, and one word.

Paste that sucker in red on the cover across a suitably off-putting image, and you my friend have rentals. Usually one from me.

Madison County is such a film. It is also such a shitty film that I will not use as many words to describe it as I did above getting this far. In fact I will use some concise shorthand to get to the point and save you precious time that can be spent not renting this film.

Four young people (2 gits, 4 tits – you won’t see ’em) and one protective older brother (emotionless killjoy) take a long road trip (failed sex party) to interview someone who claims he knows where 33 murders have been committed (“come in suckers“).

The long drive (filler) takes them to a rural community (Hicksville), where the locals (drooling rednecks) take either exception or particular interest to their presence in the tight (inbred and unpleasant) town.

After much trepidation and tension (actually none of either) a startling (not) development Introduces our terrified (bad acting) tourists to the eye-opening truth about Madison County (I’ve already forgotten it).

In a departure from such films there is little gore (gore is expensive and require a semblance of talent), with the (total absence of) tension arising from the performances of the (currently unknown and destined to remain unknown) cast.

With a twist (I think it was a twist) to savour (nope, gone) and an (immensely unsatisfying) finale, Madison County is a film that will have you talking (about anything other than Madison County).

One scene has the carful of boneheads stopped by a police car. For five or six interminable minutes you wait for something – anything – to happen. Warn them off! Menace them! Kill them! Give them a fucking ticket! Anything but nothing.

And ‘anything but’ is the advice that I would give anyone who spots the red UNRATED sticker and wonders if this is the rare film with that sticker that proves worth checking out.

Final Rating – 4.5 / 10. Madison County was made by the first little pig that could only afford straw to build his house – a total waste of time. For future little pigs, if you don’t have enough budget to afford proper building materials, don’t settle and build a shitty house.