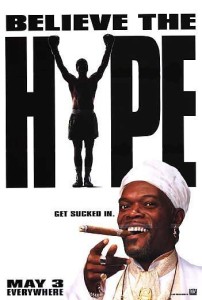 When boxing’s heavyweight champ finds his fight purses, contenders, viewers and interest levels lowering by the uninspired bout, it becomes obvious that a little thinking outside the square (circle) will be required. 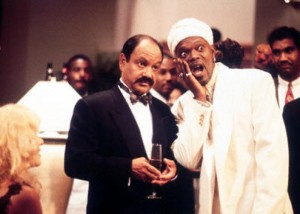 The answer arrives with the last guy to knock Roper out, albeit in his pre-professional days.

The man in question is no longer a boxer, no longer in any shape to fight, and no longer interested in being anything other than the screaming frontman in a Pearl Jam style alternative band. All of these things are no longer important once Roper starts his rapid fire chatter peppered with dollar figures and grandiose statements. Terry Conklin (Peter Berg), soon to be ‘Irish Terry Conklin’ (even though he is not Irish) is up for the challenge.

But is he really? The challenge seems to be to make the challenger seem even partly qualified to step into the ring with Roper, who for his part figures he can coast towards this fight with no training and no commitment.

The Rev’s team of hangers on and yes men try to do their bit (a crazy cast that includes Jon Lovitz, Corbin Bernsen and Jeff Goldblum) but with all of the great false marketers currently trying to save Miley Cyrus’ career, it seems like a futile effort.

The funniest element of The Great White Hype is how laughably formulaic and simple this all is. By making what is ultimately a parody of heavyweight boxing and throwing in a lazy racial undertone (Get Whitey) here is a film that was never really going to be a contender, even before it became desperately unfunny. Once it is evident five minutes in that this will be a laugh free 12 rounds, then the film groggily lurches towards the ropes, before going down and staying down for the count.