As a writing duo Edgar Wright and Simon Pegg are the definition of ‘measure twice, cut once’. The level of preparation and planning in the script development stage is patently obvious, with the benefits flowing through the finished film.

Wright and Pegg painstakingly craft characters first, then ensure that all their actions and dialogue remain true to those individuals. The end result of this is readily identifiable real people that can be understood, empathised with or laughed at/with, depending on the circumstances. They can then have things called ‘character arcs’, increasingly rare commodities now that Hollywood comedies have become an endless stream of retakes starring the latest Ferrell disciple striving to force in the latest semi-profane ad-lib (that he thought of days before).

This leads to a script that works on many levels. There are the easy – and frequent – jokes for those who don’t go to the cinema to exercise their brain. Small throwaways that refer back to previous scenes for the keen eared, and layer upon layer of in-jokes and references to previous films Shaun of the Dead and Hot Fuzz for the devotees who will line up to purchase multiple copies of this on blu-ray on the day of release. Most importantly there are no clumsy moments shoehorned in. No moments where someone earnestly says “of course, as we all remember Bill Bellamy was stung by a radioactive bee that day. That’s why we call him B-Man. Wait, where has Bill gone? And what’s that buzzing I hear?”

Despite all of that The World’s End will make less money at the box office that the next cookie cutter comedy… Say Anchorman 2 for example. (“Scripts? Where we’re going we have no need for scripts.”) This despite standing head and shoulders above it and no doubt being included in multiple end of year best of lists.

BY MY LEMUR’S SCROTUM THIS IS NOT FAIR! (12 hours well spent at improv class…)

Now onto the latest from Wright, Pegg and Nick Frost.

Inside every nearly 40 something is the scrawny and spotty 17 year old they left behind. For most of us, this leaner, less weathered version of ourselves is kept hidden from society, stashed away safely with all of its doubt, angst and immaturity, waiting for alcohol to temporarily unleash it. Gary King (Pegg) however, never seemed to stop drinking. Not only that but he never seemed to leave 1990, the year he was 17. He has the same clothes, the same mix-tape, the same car, even the same basic life goals, twenty some years on.

Gary King might be the 40 year old most likely to say “I know you are but what am I?”

While all around him moved on with their careers, their families and their lives, Gary only feels they have moved further away from their best days.

So now in the anniversary year (“every year is the anniversary year”) of the fabled teen pub crawl known as The Golden Mile, Gary appears before his four childhood friends and declares that they have unfinished business to attend to, namely a pint at each of the twelve pubs in their old hometown of Newton Haven. With twenty years and wildly divergent pathways between encounters, Gary finds more than a little reluctance from his now middle aged friends, especially as they didn’t all leave on good terms. But the power of reminiscence and the lure of an all too rare booze up prove too tempting, even for now teetotal lawyer Andy (Frost).

So it’s back to Newton Haven, home to England’s first roundabout and apparently not much else, where Gary declares that come hell or high water – or alien takeover attempt – he WILL be completing the Golden Mile tonight. 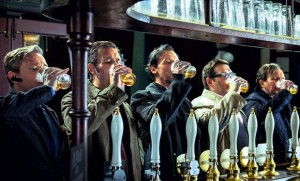 “Nice chatting with you boys.”

Amazingly given the two odd decades elapsed, all twelve pubs are still operational. Like any reunion between long estranged mates things progress tentatively. Some ‘how’s your mother?’ queries. Some reminiscing. Some banter. With each pub and each pint though the topics become more random, the defences lower a little and the dialogue grows increasingly more slurred.

While some familiar faces appear – including a relative (and past love interest), a dealer, a barfly, a bully and of course various bartenders – the expressions remain blank. Though it might appear in many ways that sleepy Newton Haven hasn’t changed one little bit, it seems that the five newcomers are now faced with complete strangers…

Eventually though, external factors ensure that the five former pals will face far more this night than hazy memories and pent up frustration.

For those that are lucky enough to have seen Shaun of the Dead and Hot Fuzz, it may not be surprising to hear that the film’s tone and indeed genre changes dramatically at one point. In fact it’s a wonder that the second half manages to maintain the chuckle factor, given the introduction of Jackie Chan style brawls – Andy in particular gets his Yoda from Attack of the Clones on (*AHEM* Drunken Master), massive explosions and a car chase (of sorts). Thankfully for action fans, everyone actually does fight like drunk people imagine they look like when they fight, not the clumsy pawing and vomit stained futility that is an actual drunken brawl.

And all the while Gary King yammers on incessantly. His is a volume business. He talks like if he says enough things without pause, then surely some of it will make sense, even if they must first sift through the misdirected bluster, bravado and bullshit that most of his (entertaining) dribble is comprised of.

Pegg is great as the abrasive Gary. Frost has the biggest internal evolution as Andy – though to be fair copious amounts of alcohol are involved. While he probably cannot say dual-stool-duel five times real fast, thankfully for us he can perform the physical acts required to pull one off. The remaining three musketeers are also exceptional, almost a given seeing that they are played by Paddy Considine, Eddie Marsan and Martin Freeman, with fair maiden Rosamund Pike popping in and out for much of the ride as well.

There is a genuine chemistry between the cast, probably given that most of them are at least acquaintances if not pals in real life. Here is an evening that good or bad most adults have endured/enjoyed at some point in their life, granted culminating in events that none of us have experienced.

Likewise everyone has had a mate like Gary King at some point in their life. If you can’t think of who it actually was, chances are it may be you…

My advice to you is to summon said mates, gather in someone’s rusty fuel guzzling chariot (or more likely the baby-seat filled family mover), and take your last chance to catch The World’s End in cinemas, before inevitably checking it again and again on blu-ray.

Time and future viewings will inform me as to where The World’s End nestles when compared with Shaun and Fuzz in this most entertaining of mismatched genre trilogies. This one encounter though guarantees that there will be many more chances to help me make my decision.

The World’s End is funny, moving and action packed. Above all that it is bloody good. Consider this your Last Call. Watch The World’s End.

Final Rating – 8 / 10. Many films this year will be more discussed and more celebrated. More than that will make more money. Not nearly as many will be as good as The World’s End. And if one emerges that is better than this then you should watch that too, for it may well be the Best Film of 2013.