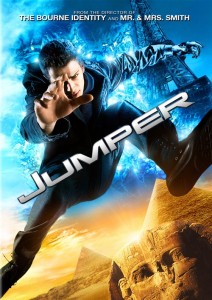 A ‘Jumper’ is someone – one of a select few –  who can instantaneously teleport themselves elsewhere simply through the power of thought and will.

When teenage David realises this latent skill, he takes a moment to consider his options, then transports himself elsewhere. Away from the bullying classmates and the loser Dad (Michael Rooker) still pining for a long since departed wife. Away in fact from anyone who knows him at all.

A few years and some carefully planned ‘jumps’ into bank vaults later, and now 20 something David (Hayden Christensen) is a citizen of the world. He travels where he wants, when he wants, and once there he does what he wants. (Wow is this teen-friendly stuff or what?)

But traversing the globe on stolen funds isn’t without repercussions. Unknown to David is the pursuit of Roland and his crack team, hell bent to remove all ‘jumpers’ from the world. Why is never explained. Roland keeps rabbiting on about how evil they are and stuff, but aside from the stealing they hardly seem to represent much more than nuisance value. Maybe Roland is jealous? With his ‘black guy rocking a bleach white’ hairdo he is obviously crying out for attention…

David eventually returns to his home town to try it on with his childhood crush Millie (Rachel Bilson) who has no idea of his abilities and in fact has almost assumed that David was dead, and the two head off what might pass for adventure. At least the backgrounds across Europe and Asia are occasionally pretty.

It doesn’t help the film’s cause when Hayden Christensen and Rachel Bilson are so steadfastly charisma free, having no discernable personality between them. It actually looks painful when Christensen delivers lines, and Bilson is strangely lifeless and distant, which given that their relationship is allegedly the centre of the film is cause for concern. This is only exacerbated by Samuel L Jackson’s performance as Roland, which is so transparently phoned in that he might as well worn a t-shirt that says “Just boosting the mother-fucking box office figures’ on it. The only pulse in Jumper is provided by Jamie Bell, as an urgent rebel guerrilla type that has been evading Roland and his team for some time, but even he is not using the ability for anything more than eluding the so called bad guys.

A few years ago fanboy fave Wanted took the everyman type and placed him smack dab in the unpredictable and fantastical world of cartoonish contract killers. Jumper attempts to try to do the same thing, only it fails to uncover a single memorable scene to build on the flimsy premise. Not a healing wax-bath, a bending bullet, not even a topless 40 something assassin with eleven or so kids.

Jumper wants to be Wanted when it grows up, but unfortunately it is far more akin to Chronicle, another film that emerged direct from every teenager’s ‘wouldn’t it be cool’ file, but fails to convince anyone over 25 of the presence of any actual coolness.

Final Rating – 6 / 10. If I was Jamie Bell I would have ‘jumped’ into another film altogether. You should too.