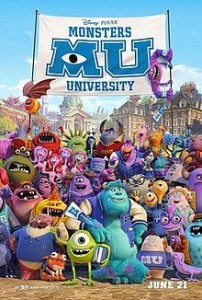 If there is such a thing as an under-appreciated Pixar film, then Monsters Inc is it. A film built around the conceit that not only are the imagined monsters in children’s closets real, but they are so reliant on the screams and fear of young children that their entire society relies upon it. Of course their energy source – and belief that human children are toxic – is tested when an adorable young girl enters one of the magic doors into the monster’s universe.

Monsters Inc was clever, often hilarious, always charming, and for mine better than any Pixar film this side of Toy Story and Finding Nemo.

So now that Pixar have released the prequel Monsters University, I wonder why they decided to abandon the infinite possibilities afforded by a society of monsters in favour of the feuding frat formula of Revenge of the Nerds and Animal House?

… Pause to make the obligatory point that the quality of the animation gets better every year. It really is astonishing how real some of the backgrounds look at times.

Mike (Billy Crystal): the small spherical green one who only requires one contact lens. Mike has been swotting to be a ‘scarer’ since a small M&M sized – and coloured and shaped) – lad. Mike is positive that he is the guy who will petrify the human kids to generate energy for his beloved home planet. He’s dreamed of this his whole life.

His only problem being he is just not that scary.

Sully (John Goodman): the big blue hairy one with horns. Sully is the latest in a long line of Sullivans, a much revered family of natural ‘scarers’. Sully has not studied, not researched and not tried for some time. It will all just come for Sully…

Sully has assumed this will all just fall into place his whole life. 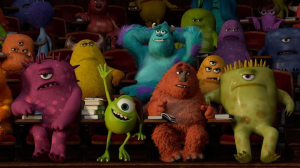 Mike and Sully are both ‘scare’ majors who are abruptly and unceremoniously turfed by the Dean from their chosen class after butting heads mid-class and damaging the relic they could least afford to damage. With no options left they reluctantly team with a bunch of nerds and hopeless types – the most amusing being a purple whirly-gig stoner type – to win the knock-out inter-fraternity competition, thereby guaranteeing re-admission to the scarer course.

Revenge of the Nerds much? So when the staple elements of the frathouse genre are typically booze, boobs and boneheads, definitely not usually associated with family friendly PG fare… where can the laughs come?

Without that triple threat we are left with the conniving Dean (Helen Mirren) who doesn’t ‘get’ our heroes, the well meaning but forgettable Professor (Alfred Molina) and the big dumb jock who everyone simultaneously loathes but nonetheless desperately wants approval from (Nathan Fillion). Ironically – or perhaps not given he is a chameleon after all – in all the brightly coloured hubbub the villain of the first film Randall Boggs (Steve Buscemi) finds himself lost on the periphery of proceedings, a seldom mentioned character relegated to the sidelines.

Then, it is on to the competition, where the seemingly mismatched ‘OK Frat’ team must overcome obstacles, their own self doubt, and bickering with each other to triumph over… well there’s no ‘evil’ in Pixar films… let’s just say vaguely naughty types who would see them fail.

While Monsters University misses the home run hits of its predecessor (nothing here compares with the big finale in the door factory) a couple of the contests are amusing, most notably a foot race through spiky-thing infested corridors, where hitting the spiky things instantly causes the body part to swell dramatically. And of course the characters are charming, likable and well voiced, always with a carefully scripted line loaded and ready to fire.

Despite the constraints imposed by the premise I still enjoyed Monsters University. The Monster-verse is incredibly well realised and populated with hundreds of fuzzy, scaly, hairy, giant and slimy types, all grinning inanely and constantly spitting toddler friendly quips. If you need an excuse to take the kids to the flicks then this is as good a chance as you will see this year.