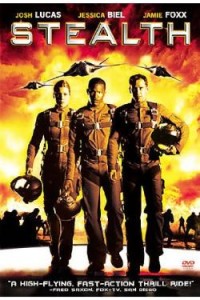 Here’s how I see it; film director Rob Cohen was playing with his 4 year old son one day. When his son held up a rudimentary drawing of a jet plane and said “cool dad?” Rob got an idea… He then asked his 4 year old to pen the script to a 130 million dollar movie.

I can see no other way to explain this wilfully disgusting film.

I couldn’t have hated this film more if it woke me in the dead of night wearing one of those ridiculous ‘Keep calm and squeeze more mileage from this inane fad‘ t-shirts while dancing Gangnam Style and imploring me to change my service provider because ‘Jesus would want it that way’.

The US has a global anti-terrorist taskforce ready to scramble at any time. There are three pilots – look up a bit, there they are – Lts Wade (Jessica Biel), Gannon (Josh Lucas) and Purcell (Jamie Foxx), with Captain Cummings (Sam Shepherd) co-ordinating things from home base.

No problems so far. But we just started.

The trio’s character outlines might have been pages long, but no-one bothered to read theirs beyond the first line. Hence Wade is studious and determined, Gannon is a sleazy dick and a maverick, and Purcell is funky, brash and calls everyone ‘playboy’ – as his funky brashness dictates he must.

The three are great friends, even clubbing together in full uniform, and they trade turgid and unlistenable dialogue peppered with enough technical sounding terms to feign credibility. It’s just hard to think about how accurate this all is when one pearl of wisdom is “don’t think, just drink”.

One morning Cummings tells his flight crew that they are to add a fourth pilot to the group, Purcell is irate, because they will no longer be a prime number. He thinks non prime numbers are unlucky, which must make him feel like he has the upper hand when outnumbered 386 to 3…

The new member is a fully automated smart plane, capable of following orders and if necessary making its own decisions in line with what’s best for the mission. The unmanned plane is swiftly dubbed ‘Tin Man’ and converses with his colleagues in a dull monotone. He ends the film as an obnoxious, patronising smart arse – and ‘his’ is the best personality in the film.

The now quartet go on manoeuvres near Asia. When intelligence news arrives of a meeting between three terrorists in a high rise building in Rangoon in 24 hours, the group know they must act, because of course 24 hours isn’t near enough time to get anyone to drive somewhere in this day and age.

Without pausing to discuss the matter they head off ask heroes are wont to do, before realising that there isn’t actually a plan of attack. So the pilots come up with a plan, quite literally, on the fly, complete with guesstimates of death tolls, specific risks and probability of success. The mission is deemed impossible, so Gannon plays the old ‘my radio doesn’t work’ and does it anyway.

When the ridiculous mission ends the crew are ordered back to base for a debrief. Along the route they encounter an electrical storm and Tin Man is hit by lightning. Wonder if that will change him at all in the very next scene? (What an odd question.)

When some technical guru tells Gannon that Tin Man has gone a little crazy and downloaded ‘all the songs‘, he is concerned. When Tin Man – who has ALL THE SONGS remember – chooses Incubus to lead of his first playlist, Gannon knows that the plane has gone insane. But Gannon didn’t listen to his Mum when she told him ‘Son, if you’re gonna say something bad about a cutting edge top secret billion dollar spy plane prototype, just make sure you’re not still in the hangar’.

Sage advice. But no time to worry, we have R&R in Thailand. A couple of days to justify a Biel bikini sequence (no complaints) leading to unrequited lust between Wade and Gannon, and for Purcell to pick up a non- English speaking Thai girl of the street and talk to her in ethnically insensitive ways. (I keep wanting to pound the table and shout USA! USA! A bunch of times. I don’t know why.)

R&R comes to an abrupt end with news of still more terrorists – maybe the US shouldn’t keep their dislike of terrorists so Top Secret? If the bad guys only knew how troubling they found it then maybe they’d just stop?

But the terrorists are like this film. They don’t care that everyone hates them they’re moving on regardless.

The Incubus loving iPlane indeed has also seen Homeland and turns on his allies. But we knew that was coming didn’t we? This leads to three scenes that I would never have predicted;

Stealth is noisy and aggravating. A suspense & IQ free experience clocking in at a sanity testing two hours. It cost well over a hundred million to make and recouped less than half that, meaning the only stealth shown was at the box office. The in flight sequences probably ate up most of the budget, but they are hardly inventive or pulse quickening.

After I watched the film I felt I should take the DVD out and burn it, lest the neighbourhood kids find it and ruin their precious young lives by watching it.

Final Rating – 3.5 / 10. I didn’t get motion sickness watching Stealth, I got moron sickness.

(This film was lent to me from the personal collection of Ringworm, perhaps as proof that he does no research at all prior to going to the DVD shop.)