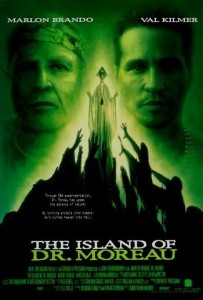 “I dub thee King of the freaks!”

Somewhere in the South Pacific there is a naturally beautiful and exceedingly picturesque island teeming with flora, fauna and… awful actors in an equally abysmal movie.

When Edward Douglas (David Thewlis) finds himself a guest on the island (thanks to a plane crash) he is given the grand tour by Montgomery (Val Kilmer), and eerily calm – some might say stoned – man who obviously finds the island quite special.

And then ends the tour by telling Douglas not to leave his hut, even locking the door as some kind of full stop to any potential protest.

Of course the film is not called The Hut of Edward Douglas, so Douglas inevitably escapes and almost instantly discovers an animal research laboratory and a human research laboratory. In fact they are one and the same, with the products being a menagerie of animal humanoids with differing species and differing beats to human ratios. The ‘beasts’ refer to Douglas as ‘Five Man’ thanks to the numbers of digits in each hand like it’s some kind of deficiency, however Alissa (Fairuza Balk), a ‘girl’ with a ratio tilted further toward human sticks up for him and takes Douglas under her wing – even though she actually doesn’t have one…

This is all unsettling enough, and then Douglas meets Dr Moreau (Marlon Brando). To save me time here describing the good Dr I will simply refer you to this pic.

As you might guess this is the furry cherry on the freaknick sundae.

After a crazy introduction to the clan the sheer number of creations comes to light, emerging from all over the island, including some that want an emancipation of sorts from their human teachings, and others that abhor these more animalistic traits. Douglas quickly realises that while the nutso Moreau loves every one of his ‘offspring’ and in fact keeps many in his main hut and raises them as his children, he realises their innate nature and keeps them in line with electronic shock chips implanted beneath the feathers, fur, whatever.

For his part the gonzo Dr doesn’t understand Douglas’ shock, insinuating that their Modern Family existence is quite normal in a ‘why would you find this odd?’ sort of way.

And as the Dr rationalises “What’s the odd snout or claw when you are striving to engineer perfection?”

Then the animals ditch their suppression chips and go rogue, proudly exclaiming to one and all ‘reverse Elephant Man’ style that “We are soooo animals. We are not human beings”. Animals with AK47s by the way.

To be fair by the time this actually happens the film had long since adopted the stoned apathetic look that Kilmer rocks through the whole film. (Apparently this was not an acting decision but genuine apathy, as Kilmer decided early that the film would suck and why bother trying?)

At least one guy knew the score. With Brando clumsily chewing through as many lines as he obviously did pizzas poor old David Thewlis is left to look alternately astonished and disgusted – which I venture wouldn’t have been much of a stretch.

The film is a confusing mess, more than a misfire, so much more than misguided, The Island of Dr Moreau is a miscarriage of cinema, with no value beyond the painful joy that these horrible films bring.

Final Rating – 4.5 / 10. Somewhere in the mid 90s Val Kilmer and Brad Pitt were unwittingly vying for the same acting jobs and magazine covers. Consider this film as Kilmer’s resignation from the race.