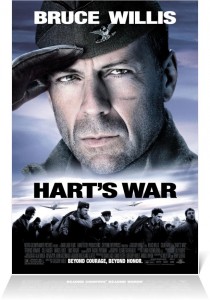 Hart’s War takes those two box office juggernauts, the trial film and the largely action free World War 2 film and quite sensibly combines the two, leading to the inevitable… well let’s just say it shouldn’t have come as a huge shock when this wasn’t a monstrous blockbuster.

It is pretty good though.

Lt Thomas Hart (Colin Farrell) works in US intelligence, far behind the lines thanks to his privileged parents and background. Until one day when he takes the wrong soft job in ferrying a ‘real’ soldier to a location near the line – a location which they find out far too late has been over-run by the Nazis. As a result Hart ends up in a mass grave, before a quick game of ‘One of these things is not like the other’ proves he is very much alive, and he is detained for interrogation.

After a lengthy questioning Hart is transported to a POW camp with thousands of other US soldiers, and the film really starts.

With the camp segregated in terms of ethnicity – Australian, American, Russian etc – the American compound is ruled by the grim faced, square jawed Colonel McNamara (Bruce Willis), at least within the fence. The Nazis serve as the wardens and guards, sending frequent grim messages to prove beyond doubt who is in charge – often with dead bodies being the outcome.

It is a bitter European Winter and after a long arduous journey the new prisoners arrive, though once at the camp Hart finds the situation no less accommodating when he is bunked in with the ‘enlisteds’ (general soldiers), even though he is a ranked officer. Even within his barracks Hart finds no let up, for while he is ranking officer he quickly finds that it is Bedford (Cole Hauser) who is the head man in this particular building. Bedford serves as the uneducated voice of the people, who follow him due to his reputation and ability to source items that would ordinarily be deemed out of reach, including small luxuries and clothing.

The tenuous relations within the barracks become even less amiable when McNamara opts to lodge two newly captured airmen with Hart and the enlisted men, Lts Archer and Scott (Terrence Howard). Despite being on the same ‘team’ and rocking higher ranks on their uniforms Archer and Scott are immediately shunned by all, especially Bedford. This is because Archer and Scott are African American, which in the 40s meant way more than it does now.

Hart tries valiantly to keep the peace but to no avail. Within days Archer is dead with Bedford being the prime suspect. Then Bedford himself shows up dead in the middle of the night having left the barracks – with Scott standing over his dead body…

Hart is concerned that Scott will be killed without trial, which he quite rightly sees as an injustice despite the evidence stacked against him. For his part McNamara agrees to a trial and elects Hart to Scott’s defence, even though Hart never completed law school. The prosecution is lead by a fully qualified and experienced trial lawyer, with McNamara serving as the chairman of the case.

The Nazis not only allow the trial to proceed but look on with bemusement, treating it all like a sideshow or a high stakes school play. Colonel Visser, the officer in charge of the entire facility, shows particular interest given his own legal background, and so the trial begins with all the cards seemingly stacked against Scott and Hart. As with all courtroom movies expect all the surprise witnesses, plot twists and clarifying flashbacks that arrive just as the ‘gasp’ real facts emerge…

Willis is reliably stoic and valiant as Colonel McNamara, Farrell well suited to roles where he is to look frequently confused and out of his depth, and Howard as ever classy and effective as the seemingly doomed Lt Scott.