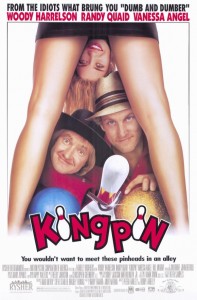 If you hate the Farrelly brothers films Kingpin won’t change your mind. If you think they sometimes take things too far then this might be somewhat of a panacea.

I personally think Kingpin is without doubt the best film that they have managed so far, and with the sequel to Dumb and Dumber their next effort I don’t see that changing soon.

Roy Munson (Woody Harrelson) is a small town ten pin bowling phenom, with the world at his red shoed feet and a life of privilege ahead of him. Then he meets and beats Ernie McCracken (Bill Murray), a jaded tour veteran willing to do anything to remain on top.

Ernie convinces Roy that the real money is quick money, through scams and ‘Colour of Money’ style hoodwinkery. This lesson costs Roy his innocence, his financial future… and his bowling hand.

Many years on, now older, balder, fatter, shadier and with a rubber prosthetic hand, Roy finds Ishmael (Randy Quaid), a naive bowling prodigy from an Amish community. Roy decides Ishmael is the man that can take him back to the top.

In the early stages the mismatched duo meet Claudia (Vanessa Angel), a curvaceous opportunistic woman who can’t decide between the good angel perched on her left mammary that says protect Ishmael from Roy and the real world, and the other one on the right beanbag that says fleece them both.

And if you don’t think that a directorial duo with the integrity of the Farrelly brothers – the men that made Something About Mary, Hall Pass and Me, Myself and Irene –  will extract every possible low brow joke about Roy’s rubber hand, Ishmael’s Amish-ness and Claudia’s voluptuosity and sluttiness, then you have no idea where this film belongs.

Still, despite years of merely tolerating the crap these increasingly desperate guys lazily throw onscreen in the name of gross-out comedy, Kingpin is very funny stuff. Funny enough even that the immortal Bill Murray is really only a bit player in the film, and while his scenes and (apparently) ad-libs are genuinely hilarious, the other hour and a half where he is not present is extremely and consistently funny too.

Harrelson, Quaid, Angel and Murray are all good sports, knowing full well that they will be the butt of a great many jokes (and that many won’t hit the mark) but grinning inanely throughout anyway. All benefit from sharing the comedic load, and just when the going gets a little slow they reintroduce Bill Murray to help top things off.

Final Rating – 8 / 10. The Farrelly brothers’ first film was Dumb and Dumber – a film I don’t get – Kingpin was their second, and a whole bunch of other crap followed. I think they learned some tricks with Dumb, then used the best jokes they had available with Kingpin. This didn’t (and doesn’t) stop them trying their luck again and again to increasingly diminished effect.

But what I mean to say is that Kingpin is very, very good.