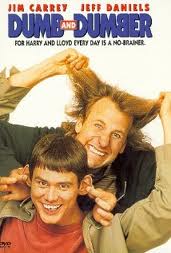 If just being stupid was effortlessly hilarious then politics would have a laugh track. I avoided Dumb and Dumber for well over a decade, deciding that just being intellectually inferior wasn’t sufficient justification for hilarity. I also wasn’t that taken with the trailer that many found so very amusing. Little did I know that the lame jokes in that 90 second distraction would end up being the ‘best’ moments in this 90 minute unfortunateness.

The most amusing part of the entire film is that as an employee of a dog grooming service Harry drives around a large dog shaped van, the rest of the film needs a laugh track to remind me what is supposed to be amusing about any of this.

Lloyd and Harry continually prove beyond reasonable doubt that they are mentally deficient, though alas rarely in amusing ways. As they mug away and babble nonsensically to disbelieving onlookers my eyes were perpetually rolling and for some reason I felt itchy and dirty.

This film does nothing for me whatsoever, I actually was a fan of Jim Carrey in his early career phase and Jeff Daniels is a funny guy, but nothing in this film is inventive or original enough to elicit a chuckle from me.

Final Rating – 4.5 / 10. Will someone – anyone – who actually finds this the height of comedy please let me know exactly why. This is boring, boring, boring.

The good news is that the DVD I rented included the prequel which arrived and vanished without a trace. Lucky me… 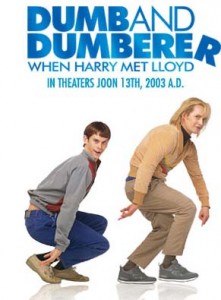 The ill fated sequel – ahem, prequel – arrived almost a decade after the first film to little fanfare, critical derision and almost universal apathy. This shouldn’t be a surprise nor is it a shame, because the film is lousy. But it is actually better than the incorrectly lauded and revered original.

We meet Harry and Lloyd again in their youth. In an incredible feat of scriptwriting it turns out that they were idiots then too. Amazing.

They spend their days being stupid and existing, until the school principal learns that he will get a big fat grant if the school establishes a special needs program. With Harry and Lloyd already on deck as exhibits A and B all it takes is to round up the usual grab bag of lovably flawed eclectic morons – holla to Shia Lebeouf who appears here – and let the script lazily vomit itself out to box office gold.

And yet somehow this is still better. This despite some woefully misguided gay jokes, some racial stereotypes that should see the scriptwriter beaten to death and Bob Saget being ‘gifted’ not one, but two entirely separate shit-rants. TWO!

With a cast of nobodies and cameos and brief roles featuring actors you know, but none that are legitimately famous… or worthwhile.

Did I mention the shit-rants yet?

Still better. How? It’s 10 minutes shorter than the first film, and the guy that plays Lloyd pulls off a reasonable Jim Carrey impression. That’s it.

Final Rating – 5 / 10. A patent cash-in that shamelessly rips off from the over-rated original. I will never watch this superior to the first film again.

I hate Dumb and Dumber with a passion. Dumb and Dumberer is abysmal in every way and an atrociously misguided effort. When will people learn that stupid isn’t funny? Funny is funny, and this is a combined three hours of not funny.