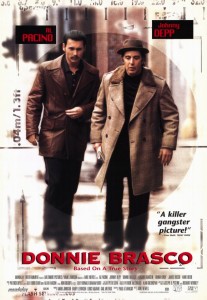 When Lefty (Al Pacino) meets Donnie Brasco (Johnny Depp) the ‘Jeweler’, Lefty has no idea that he is in fact talking to an undercover cop…

This makes it all the more awkward when he practically adopts Donnie afterwards and shows him the ropes that apparently hold together organised crime, eventually trusting this man – that would do him and his organisation ill – to the extent that he personally endorses his application for ‘in-ness’. The mafia refer to it as ‘made’, but whatever to that.

Sure as Lefty Pacino thankfully tones down the over-the-toppery that has blighted his acting for years (even threatening to derail the much better ‘Heat’). He portrays Lefty as a volatile, cocky and seemingly confident man, though one who nonetheless is not immune to family troubles and self doubt. Each time Lefty tells whoever will listen that he is responsible for 26 hits it sounds more like a man opining about how good he was in his youth.

Donnie Brasco on the other hand is surprised to even be allowed entry into the shady underworld, especially given that he cannot tell his wife (Anne Heche) and kids about his real job and doesn’t see them for weeks, maybe months, at a time.

With Lefty a loyal but slightly resentful lieutenant to Sonny Black (Michael Madsen) due to his feelings that he was passed over for a mob ‘promotion’ the film focuses for a long while on internal politics – that are apparently boring even in the crime world. Brasco on the other hand finds himself jaded by the posturing, torn between his loyalty for Lefty (who brought him in) and Sonny (who could get him further up the chain), on top of the daily possibility that he will be discovered as a rat and executed.

And you think you have problems.

I’d like to say that the action heats up when Donnie takes the crew to Miami to liaise with another criminal, who is also an undercover cop. But it doesn’t. The film moves at a snail’s pace through its two and a half hours, with us waiting patiently for the inevitable unmasking and reaction.

The only amusement found in the film was when a bunch of dangerous mafia men find themselves at a loose end lying next to a pool with drinks festooned with umbrellas for days at a time. When you have a bunch of smart mouthed, profane mobsters poking fun at a group of similar minded mobsters, many of which are hotheaded psychos, may leave you wondering if the mafia can afford to take holidays together.

It’s also no fun having an undercover rat in a film when no-one ever smells the rat.

Thankfully for small miracles. After two plus hours of what is essentially a Father / Son relationship (interspersed with occasional killings and death threats), once Lefty finally realises that his ‘son’ has been lying to his face for years you can almost see him die inside. The scenes where Lefty finally twigs are the best in the film – but arrive far too late to save it.

Donnie Brasco is a slow deliberate telling of what is apparently a true story. A long, often tedious true story. While the acting is first rate and Depp finds himself rounding into the A grade actor that he obviously is now, it is just too formulaic and straightforward to provide chills, and too slow and action free to supply thrills.

But for one full on gory sequence and the almost constant use of the F-Word, you might ask if it really needs an M rating.

Final Rating – 7 / 10. I feel contractually obligated to say this is a good film, but it isn’t a fun, action-packed or riveting one.