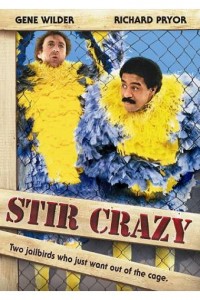 Despite thoroughly enjoying See no Evil, Hear no Evil in the late 80s and parlaying that into tracking down (the not nearly as good) Another You, I never bothered watching Stir Crazy until now even though Richard Pryor and Gene Wilder share effortless chemistry onscreen.

Harry (Pryor) is a streetwise realist, Skip (Wilder) an idealist.

Harry is a broke actor, Skip an aspiring screenwriter. After both receive bad news simultaneously they decide to leave grumpy old New York to seek fame and fortune in Hollywood.

While on the outside it was already evident that the sweet and kind-hearted Skip was too innocent for the real world. Now precious few members of society would feel ready for Day 1 of prison, but Skip is the most not ready. Perhaps the most not ready in the history of not readiness. And where Harry is concerned being streetwise doesn’t readily translate into finding comfort in a cell.

Within days of embarking upon their 45,625 day sentence Harry and Skip manage to tick off the usual prison film clichés including evil wardens, menacing inmates and reluctant romances. They decide that the impending inter-prison rodeo represents their best chance to make a break.

Yep, the inter-prison rodeo. But don’t dwell too much on the likelihood of such an event, you’ll miss the point. The point is that Stir Crazy is a little bi-polar, the first half is a buddy comedy with some genuine laughs and regular flashes of comic genius from Wilder and especially Pryor. Once the bull-snot starts to fly though the film grows ever more serious and turns into a quite elaborate and well staged prison break flick.

Thankfully both halves work and don’t tarnish the other, though the first half kind of leaves you salivating for more chuckles in the latter stages.

While not as consistently funny as See no Evil, Hear no Evil Stir Crazy is a well directed and well acted example of an over-looked 80s comedy, and proof that a comedy set in a prison doesn’t need to have multiple references to prison rape for comedy’s sake.

Final Rating – 8 / 10. The comedic genius of Pryor and Wilder is only amplified in the initial prison scenes where they take turns in freaking out. Stir Crazy might not sport a consistent tone, but it is consistently good.