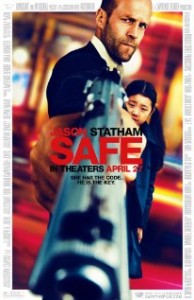 Taste this and tell me if it tastes funny.

In Safe Jason Statham inverts that premise and lays waste to half of the population of a major US city – let’s say New York – in order to save one Chinese girl with Mercury Rising disease, although she has a mild case that leaves her exceptional with numbers, I think she is savvy enough to know that hot soup should be sipped slowly.

This girl also sees things purely in terms of whether it is bad business or good business. Might I surmise that regardless of the moral or ethical dilemmas of killing half a city, placing Jason Statham as in an all arse kicking action film is good business?

Statham plays Luke Wright, an ex-cop cage fighter who messed with a fixed fight, with the Russian crime syndicate fixers reacting unfavourably, taking his wife and promising to kill anyone in his future on credit.

So the Russians hate him.

Now on the low and worrying if any interaction might lead to the demise of his conversation partner, Wright runs into the dirty cops that were the cause of his departure from the force.

The dirty cops hate him.

It is when wandering about and wondering if he might be better served ending it all that Wright saves the Chinese girl with Mercury Rising disease and a series of numbers in her head.

The triads now hate him too.

And in that annoying way that film demands, all three groups run into Wright and each other quite regularly through the film.

The good thing about being one out Vs multiple enemies is that you can spray bullets willy-nilly without fear of hitting an ally – because you have none. Statham *AHEM* Luke Wright, takes this to heart and beats down, blows up or puts holes in every living man who ever drew an unsavoury breath.

In fact once you find out what the actual ‘big prize’ that the numbers give access to, you can’t help but wonder if it’s worth killing half of New York to get it.

But that’s the ethical dilemma, Jason Statham isn’t hoping you learn a lesson, merely that you shill out a few bucks to watch him make thousands of gangster kids suddenly orphans. Statham and Safe have all your implausible action, as long as you promise that you won’t try to draw a moral from all of this you’ll enjoy some of the most visceral and effective action sequences filmed in recent years.

Final Rating – 7 / 10. There was a time when a dozen of these films were released every year straight to video. They weren’t promoted, critics didn’t bother lamenting the state of society and I journeyed to the video shop every week to look for them.

I miss those times.