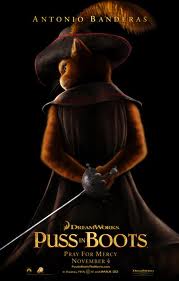 I gave Puss in Boots ten minutes of my best untainted non-cynical attention, then I realised it was everything I dreaded; a perfectly competent, mildly entertaining, entirely commercial product where the entire ‘entertainment value’ lies in the name recognition of the cast.

Seriously, you try to sell anyone a premise that starts with ‘two cats and an egg steal a goose while an unattractive couple try to thwart their plans’. Wait, where did you go? Did I mention that the cats are Antonio Banderas and Salma Hayek, the egg is flavour of the minute Zack Galifa-psoriasis and the menacing nursery rhyme couple quasi-famous celebs?

Welcome back to Puss in Boots, brought to you by various companies who will all profit from the inevitable toys and cross promotional merchandising opportunities.

Puss in Boots needs magic beans to get to the goose that lays the golden eggs. Only trouble is that Jack and Jill have the beans, and in this particular fairy tale world they are especially ornery types to save the town of his kitty-hood. Along for the ride are streetwise Humpty Dumpty (Galloping-foodstamps) and the seductive Kitty Softpaws (Hayek), a mysterious female cat capable of having Puss purr and hiss within moments.

We learn that Puss and Humpty grew up in the same orphanage and were best buds, though scallywags in their youth. As they matured Puss grew to be a more mature kitty and thanks to an especially good deed the town hero, while Humpty remained a bad egg. In fact it was an effort by PiB to reform the ovular offender that lead to both of them being exiled and ostracised from their hometown forever.

And just like that the lifelong friends went their separate ways… until that is, they teamed up once again to find the magic beans.

In reality this film is noteworthy in a mere three ways; the celebrity voices I have mentioned – that’s one – the animation is superb, but that’s par for the course these days, the third and apparently most important is that cats dance… at least they do here every few minutes. In the initial stages, while partying, celebrating, fighting and of course over the end credits.

And if that doesn’t get you well then you’re not easily pleased. And I’m afraid there just ain’t much else. What is here is adequate to the barest minimum standards for these kind of films – which is to say frustratingly decent but without real merit, creativity or care.

You almost wonder why they even bother. Oh right, all that money they keep making from us.

Two last things; there is a twist that anyone over 11 should see a zillion miles away that makes you wonder if the entire scheme was worth the trouble, and Zach Galifianakis sounds so much like Patton Oswalt that there could be genuine grounds for a lawsuit here. I hope the filmmakers realised that they could have gotten a comedic genius for substantially less instead of a heavily bearded flavour of the minute – but then I really don’t think they care.

Final Rating – 6 / 10. Another purrfectly competent, patently unnecessary and fully unrewarding animated product rife with crossover merchandising potential. I want to give it less than 6 but then these things are always just good enough without being nearly good enough. Go get ‘em kids, then wonder why you did.