This edition is deserving of scorn and derision. Even if the film itself exists in a possibly credible genre, providing at least the possibility of a decent film, the filmmakers ignored this fact in favour of churning out something quick easy and brainless.

The results are all the same; abysmal, entertainment free crap. 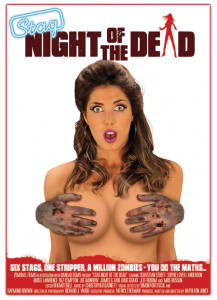 Stag Night of the Dead

Stag Night of the Dead

Get this right, a zombie comedy right! That’s a comedy… with zombies.

Bet you’ve never heard anything remotely like that premise have ya? I mean who would think to put two such juxtaposing elements side by side in the one film?

Shaun of the who?

Yawwwwwnnnnnn. Here we go I guess.

While the title seems kinda clever at first  it actually totally is not if you give it 5 seconds thought. But why would you bother with that Potential Viewer, when the filmmakers obviously couldn’t be arsed putting in more than the absolute minimum effort from their side of the lens.

I can’t end without mentioning the excruciatingly awful Ali G style character complete with neon tracksuit and sideways cap who whines his way through scene after scene as if he’s a plant for TV companies vying for your business once you throw the remote at the screen. Unfortunately this dick is the only character that I can even vaguely recall the day after and for all the wrong reasons.

It’s very likely that the ‘talent’ behind this sub-Rob Schneider effort (that’s right, I went all Schneider on ‘em) stumbled upon a title and thought fit to rest upon their laurels. Even the token stripper chick knew this was destined to be crap and didn’t even agree to release the jubblies.

Final rating – 2.5 / 10. Stag Night of the Dead was a booze fueled night and five minutes of hasty planning lazily executed. It seems to me that one out of two citizens of the UK have now played a zombie on film, the other guy probably directed it. 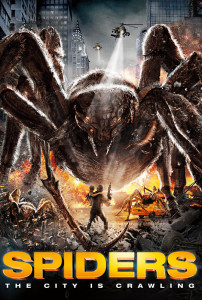 I have so many problems with this film, which was a lean 90 minutes yet felt like it took a week to end.

The first and only one I will bother highlighting is this one; space spiders. I mean if they are from space why make them spiders? And vice versa.

Either they are spiders or aliens… Moving on.

A clean up crew wander around in carefree fashion collecting evidence and trapping the deadly spiders. They wear protective clothes but for some reason nothing covers their neck, ears and scalp. This is never mentioned, nor do the spiders work out that a sweet spot exists.

If you choose to make a B movie about rapidly growing space spiders in the Big Apple at least go out swinging. Either make it big and dumb or small and credible – and the words ‘space spiders’ kinda rules out the latter option.

Just don’t sit on the fence!

Final Rating – 4.5 / 10. How can you take space spiders seriously? And furthermore why would you want to? Bad can be fun, dull is unforgivable. 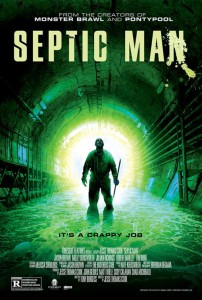 A bit of a departure this time. Instead of a poorly constructed haiku, this film inspired me to more childlike, infantile lengths in amateur poetry…

The obvious observation of Septic Man is that it is full of shit.

When a small town finds itself struck down with a disease so insidious and contagious that the entire region is quarantined off, local septic man Jack hitches his overalls and decides he is the man for the job.

All were ill due to a spill,

Jack fell down and nearly drowned,

Crook Jack got, in his smelly spot,

Of waste and toilet paper.

Boils and sores oozed from his pores

And his film was a big time waster

That’s how dull this film was. As Jack stewed in human waste and rotting small animal carcasses while leering cretins loomed above, I re-wrote a kid’s poem in his honour.

My poem is terrible. I’d wager that the entertainment value to time spent ratio sees it a much better use of your free minutes. Fifteen seconds of awkward nonsense trumps eighty minutes of unfathomably boring shit.

Final rating – 4 / 10. Yet another example of Canada filmmaking’s willingness to green light and fund any old nonsense.