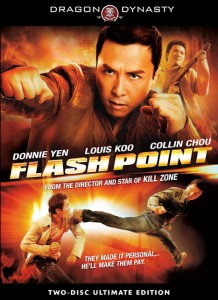 Donnie Yen is as good looking as Jet Li and nearly as accomplished athletically as Jackie Chan was in his prime, yet ask anyone but the most die-hard martial arts fans who he is and you’ll get a ‘Who?’…

This is a shame, because Donnie Yen deserved better, and Flash point is a pretty good example of what he is capable of.

Set in pre-Hong Kong handover 1997, Flash Point follows a cop named Ma (Yen) who in classic rebel cop fashion gets results by following his own rules. Which happen to not strictly adhere to the rules of Internal Affairs.

So he is suspended.

Suspended until a big breakthrough in a case demands that he return as the only man to handle such a delicate situation, what with a Triad gang lead by three vicious brothers with a special distate for witnesses and the law…

And handle it Ma does, once again referring back exclusively to his own rule book.

For a long while Hong Kong films confused the lines of right and wrong; good guys were often a bit bad and bad guys often were able to exhibit redeeming qualities, occasionally even pulling a 180 and turning against the dark side.

Maybe it’s the 90s setting but Flash Point is a welcome retro Flash-Back to a prior era where bad guys were truly bad, and deserving of the king size ass-whipping that Donnie presents them.

And really the only reason to find Flash Point is the climactic last half hour. The film is very formulaic and laden with the usual self doubt and guilt now deemed required to justify any act of violence, thankfully though once Ma erupts the actual period of vengeance is totally – and over the top violently – satisfying.

Yen is all power and urgent fury as Ma, in one scene caving in one assailant until he must have been unrecognisable, before leaving the mess for others to sort out and pursuing the rest of the gang to dish out even more painful justice.

Final Rating – 7 / 10. Like many action films that don’t climb any great heights Flash Point won’t remain embedded in your memory for long, but the finale is totally kick-ass and serves as a reminder of what Donnie Yen is capable of.

I just wish that in the last decade he was given more chances to show his skills.