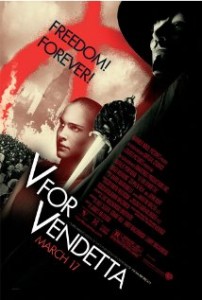 Here is a film that would be more aptly titled ‘P for Pretentious’, I grew increasingly tired of having to feign shock at the constantly unshocking twists, turns and occurrences. The only thing that I was more tired of was the po-faced uber-serious dialogue aimed to wow the backpack wearing, computer-chair based wannabe revolutionaries among us.

The plot follows Evie (Natalie Portman), a young woman with a troubled past in a post plague future in which London is one of the last bastions of ‘civilised’ society. Only this skewed view of civilisation is more akin to that of the Big Brother regime of 1984 (in a turn about for the books the oppressed character from the 1984 film is now the oppressor, both are played by John Hurt). The powers that be deal with corruption, free thought and rebelliousness swiftly – unless it is on their side of the fence – and use the media to suppress, placate and keep any semblance of genuine public emotion under control.

What will awaken this slumbering, guileless public? Well a pretentious alliterator with a silly mask and an Uma-from-Pulp Fiction wig. That’s who! 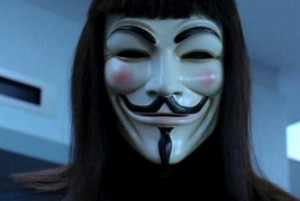 Remember when she danced with Travolta at the diner?

Self-dubbed as only ‘V’ (Hugo Weaving), he announces himself to the world by saving Evie from a dire fate at the hands of the so called law enforcers when she dared venture outside after curfew, then perhaps feeling that this noble gesture might go unnoticed he then proceeds to blow up a large building. Take that society!

Of course the media spins this act immediately, telling one and all that it was a planned demolition – and let’s have no more talk about this bizarre cover-up.

So V hijacks a TV station – every TV station – and transmits a message to the public, announcing that 12 months hence will see an act that will shake the foundations of society and unite one and all against tyranny. It was a different speech but just as pompous and pretentious as that.

On the way out he rescues Evie from capture and takes her to his hideaway, where he informs her upon awakening that she must remain with him for 12 months until the deed is done. Evie is understandably reluctant initially, I mean does V have cable TV? Does she have to listen to his monotonous posturing and inane dialogue all the time? Will he ever take his stupid mask off? He must smell awful under there.

The answer to all questions is:

Remember when she danced with Travolta at the diner?

V is hardly idle in his 12 month wait until his big day. He flits about the place removing corruption and evil from society, all the while spouting gibberish about the need for terrorism and the justification of violent action.

Meanwhile Steven Rea features as a noble cop closing in on the real unspun truth, Stephen Fry plays a TV exec with several reasons to not want to rock the boat, and the secret police edge ever closer as Evie realises that she must choose a side once and for all; the evil corrupt rulers of the land. Or the dick in the mask.

I disliked the film before this started, detested it once it did, then absolutely hated it when a second act twist involving Evie’s long term incarceration and torture annihilated any semblance of credibility that this ridiculous crap held.

V for Vendetta is technically a fine achievement, at a tick over two hours it looks great and is for the most part well acted. But when your message is straight up dumb and the leaps of logic required at times too difficult to make the only danger that the film holds is the danger of me being bored to death. That and the infinitesimal chance that some of those backpack wearing gits will rise up from their computer chairs to overthrow this fascist dictatorship under which we are squozen… wait, you mean we’re not? Well I need to rebel against something! Oh well back to Skyrim for another 4 day session.