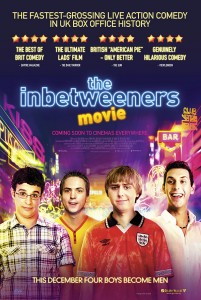 The third guy’s head looks like a rhombus. Yay photoshop?

I know nothing about the TV series of the same name. I guess it takes the same four characters from this film and restricts them to more banal fare in and around their homes.

Neil, Simon, Jay and Will have finished school for good, and plan to celebrate with a two week ‘mental holiday’ (mental in terms of crazy, not refreshing the mind) to a Greek island, away from bullies, dickheads and their (legitimately) embarrassing parents. They even have some regrettably frank T shirts made up proclaiming them members of the Pussay Patrol.

Here’s all you need to know about the foursome. Two are essentially ‘nice guys’, Simon has recently been dumped and is openly – and constantly – pining for his ex, Will is a nerd, knows he’s a nerd, knows that he doesn’t really belong, but that won’t stop him trying. (Will also narrates the flick and boasts a voice that I find all too aggravating and annoying.) The other two are more ‘lads’, Jay is your stereotypical ‘I’m gonna bang everything that moves – or at least talk about it in excruciating detail’ guy who is constantly on the pull, and Neil has prepped with a glorious fake tan for the trip, and has committed to not cheating on his back home girlfriend, unless of course the woman in question is plus 50, fat and just plain wrong.

Upon arriving in Greece the reality of the dream holiday soon takes hold, their classy hotel has 50 euro fines for floor defacation, Simon’s ex is also holidaying down the road, and there are apparently good-looking popular bullies overseas too.

Regardless, these are mere inconveniences for the foursome, and the holiday is off and running, with skirt-chasing, alcohol, stoushes, pranks, wholesale teenage male stupidity and altogether too much nudity (the too much reference means it is practically all of the male variety). Of course all the right girls aren’t interested and the wrong girls are all over the shop.

In conveniently cinematic fashion the very first bar that the gents decide to check out also has four female punters, luckier still the same four girls that they seem to run into with almost monotonous regularity regardless of where they are.

I was amazed at these lads ability to drink, it seemed that they were almost constantly imbibing glasses of pure alcohol, usually shooters, yet only twice does one of them lament their over-indulgence, and only once does it seem to result in the physical rejection of the offending alcohol.

The Inbetweeners movie isn’t really offensive, thankfully non-violent, and even though the gross bits are indeed gross you’d be silly to think they aren’t really going on all over the planet every weekend – though I’d question the thought process that justified walking around with a banknote jammed in your nether-regions for a fortnight.