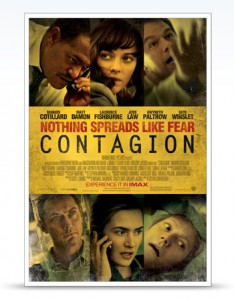 Contagion is many things, well crafted and acted, chilling, hopefully extremely unlikely but unfortunately not implausible.

Ironically given the title one thing it is not is catchy, which given the subject matter – a mystery virus that kills millions worldwide – is totally understandable. This means that it is another film worth watching but probably not revisiting, as entertaining is another word that doesn’t belong in the introductory sentence above.

Put another way this film joins Babel, 21 Grams, Schindler’s List and Hotel Rwanda as films that would raise an eyebrow if they showed up in a friends DVD collection.

Contagion is everything Outbreak wasn’t, but to save time I can say that the main difference is that it is ‘good’.

Once the virus commences it’s worldwide tour there are no quick fixes, no supercomputers, ‘Rain Man’ savants, brilliant kids to suggest it’s origins, no flame haired hero with abs of steel rides in on a white horse to save the day with seconds to spare and no convenient near misses. Just long sequences that allow the stark truth to unfold over several continents, often without a musical accompaniment to let the silence and desperation sink in.

Make no mistake, Contagion might be PG, but people die. Lots of people.

As with so many things the unnamed virus is simply another thing ‘Made in China’, unfortunately tourists and business people have a habit of touching things and breathing, which aids and abets the virus to spread to all areas of the globe swiftly. (Thankfully we are spared an overdose of sciencey looking charts and diagrams, though in the early going we are told the populations of the various initial hotspots.)

An all star cast peppered with award winners and surnames like Winslet, Fishburne, Damon, Cotillard, Law, Hawkes and Paltrow get cracking at either being infected or helping the infected.  (I mention Paltrow first because as the trailer shows she is infected early, and gets only enough time to make a few of the faces that her offscreen hubby must’ve made when she suggested ‘Apple’ would be a good name for a kid before gurgling her way from existence.)

As the death toll rises so too does the level of social network chatter, blogs fire up with conspiracy theories, some wonder if it is an act of terrorism, and the government opine that all this death is so inconvenient.

On a related note Jude Law features as one of the more prominent and active bloggers (which is a waste of his good looks), and he sports an accent that changes through the film of indeterminate origin, at times I swore he was supposed to be Australian, others his normal UK twang shone through, and still others a bland confusing melange of accents. Not important. Just weird.

Strangely enough given the subject matter the film largely ignores the grieving, sure we see the bodies and sense the desperation of the as yet uninfected, but precious few moments are committed to showing the sorrow and impact on those that have lost loved ones. Even Matt Damon – who plays Paltrow’s husband – only wants answers, not seeming to spend time considering his loss.

Ultimately as mentioned earlier Contagion is a sadly effective movie. We all know that new viruses spring up periodically (H1N1 and swine flu are both name-checked here) and that eventually one might arrive that laughs at our scientific geniuses and air-proof suits. This unknown makes viruses scary, and Stephen Soderbergh milks this for every gosh, sigh and sniffle he can without resorting to histrionics, stunts or a cute little infected monkey.

Final Rating – 7.5 / 10. An effective human drama for those that miss the good old plagues and epidemics of centuries gone by. Contagion is a very good movie, but not a date movie, after this you won’t even want to touch yourself…