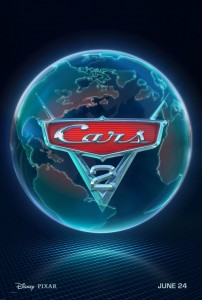 Technically Cars 2 looks amazing, as all animated films do nowadays. There were times when I was looking at close ups of various automobile parts and I could’ve believed they were photos.

The problem is that everything is just a little off. A little forced. A little… clumsy.

In the past Pixar has made concessions to no-one, sure they had their share of cute toys, animals and in this case cars, but they made films without the ‘for’. 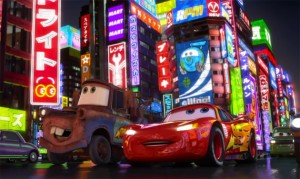 The kids sections are mostly alright and revolve around a global series of races between Lightning McQueen (Owen Wilson) and a cocksure F1 race car named Francesco Bernoulli (John Turturro).

The ‘grown up’ part is where things go a little awry, it seems Pixar have spent so many years hearing about the little touches that set them apart that they decided to throw as many little touches into Cars 2 as they could. The result is a thousand ideas trying to get through the door at the same time. Each time the spy part came back to the centre I found myself wanting them to start another race so it could be simpler and easier to like.

Cars carefully tries to pander to as many demographics and groups in the audience as possible. The toddlers like the bright colours and cars of course (there were three ads prior to the film marketing them), the other kids laugh at the funny voices and dream of one day racing their own car, the grow-ups get the more adult references including the subplot about spy-cars voiced by Michael Caine and Emily Mortimer (do you really think a kid will get the Bond stuff?) and recognise the notable voice cameos,  (I was told afterward that the guys from The Deadliest Catch and some real life race drivers all had minor roles. I am neither a Deadliest Catch nor a racing fan so I caught neither).

The problem is that in blatantly trying to pander to every audience – again something Pixar has needed/bothered to do before – Cars 2 becomes everything and nothing to no-one. Everyone gets something but not enough of it. After a while I gave up trying to feign interest in the spy stuff which is sporadically included and channelled my inner toddler by waiting for the next car race scene. At least the byplay between Bernoulli and McQueen is your standard trash talking and not the try-hard spy stuff or the slightly forced ‘save the world through efficient fuel’ message. Don’t they realise they are a planet full of cars? 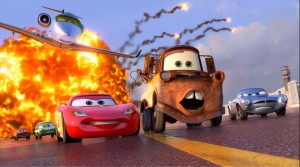 Oh, and there is a dreadfully misguided ‘lesson’ to be had here. The hotted up, successful and universally adored Lightning McQueen finds best pal Mater – a rusty old tow truck with a redneck accent and social deficiencies – a pain in social situations and basically alienates him early in the film. It takes the rest of the film – and numerous pieces of advice from others – before McQueen learns that friends are friends.

If that’s what it takes to learn that then McQueen is a dick, and Mater would’ve been better served without his ‘friendship’.

Final Rating – 6.5 / 10. I still liked most of Cars 2. So did a couple of mates who took their kids. My 4 ½ year old liked Cars 2, but nowhere near as much as he likes Nemo and Toy Story. I think that will prove the legacy of Cars 2, a film that tries so hard to please everyone that it will end up the film that everyone ‘kinda likes’.

Just not enough to bother watching it again. Sorry Pixar but after 15 years you finally dropped the ball.