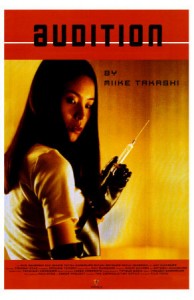 If you think this poster is perhaps a little ‘spoilerish’…

There is no real reason that I never watched Audition up until last weekend. I knew about it, saw it often enough on the DVD racks, saw it listed in various lists describing unexpected plot twists and random violence, even caught a few minutes of it late one night on TV and eventually twigged as to what it was.

Essentially I knew in advance what the big ‘twist’ was and couldn’t be bothered sitting through the couple hours to get to it.

And now that I have yielded and given in to watching the thing, I can say that Audition is just what I expected. A more concise review might say simply ‘underwhelming’. (Who knows if I would’ve thought differently had I known nothing in advance about the plot? But Audition seems to be one of those films that almost everyone knows hook and openly describes it, kinda like The Sixth Sense or The Crying Game – even people who haven’t seen it know how it ends.)

Since the death of his wife Aoyama has more existed than lived for 7 years, devoting his life to his work and his teenaged (and level headed) son.

Until one day when his son bluntly suggests that he should remarry. Aoyama considers for a while, then decides to give it a shot. But with middle age approaching and a distrust / fear of the dating game he looks for something a little more streamline.

The answer to his problems comes after a suggestion from a friend in the movie industry, he agrees to promote a fake movie and invite several young women in to audition (there you go!) the hopefuls, not for the film, but as a means of introduction to Aoyama. The quirk is that he decides not to seek out the confident and outgoing applicants, but the vulnerable, sad and disappointed – maybe even a little desperate – as they are the more likely to welcome an approach from a well to do man several years their senior.

When going through the written applications, all accompanied by a photo, Aoyama culls his short list down to 30 ‘co-stars’, with one catching his eye in particular. In the lengthy interview process that follows this aspirant does little to quell his enthusiasm, she is Asami, tall, slim and reserved with a background in ballet and a disarming honesty, Aoyama is instantly smitten. His friend warns him about plunging headlong in too deep, and that first impressions can be deceiving, but it would be fair to say that neither could have predicted just how things might turn out.

Of course the movie wouldn’t exist if Aoyama didn’t make contact with Asami, and it is no spoiler to say that they spend time together. But as far as plot events go I will leave things there…

Some scenes in the mid part of the film are downright tender, and I must admit that the first hour in the film did actually build towards something. It’s just that the final third of the film was altogether too ridiculous for me to care, and the lazy ‘is it a dream or isn’t it element’ grew more confusing the more it went on. 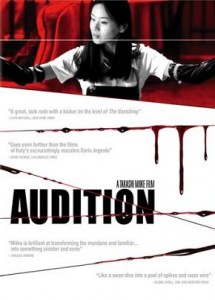 … check out this one!

(Again spoiler free: Are we supposed to swallow all the revealed elements just because Aoyama seems to dream them? After all he wasn’t present and wasn’t told directly that they even happened? Are we to believe that he is supposed to believe them?)

The much hyped incidents that occur near the film are indeed… affecting, just not as much as I have been lead to believe, and I must concede that some of the imagery is equally impactful. But all that you can take away from a two hour viewing experience is an ultimately pointless first 90 minutes that merely served to get to these couple of memorable moments, pretty much throwing character development and logic out the window, who really cares?

Audition is just a movie notable for little more than two sequences lasting maybe 10 minutes. If you consider yourself a devotee and think I missed the point entirely, that’s fine. Just ask yourself how many times you have watched this film all the way through, without simply fast forwarding to the 90 minute mark?

Final Rating – 6 / 10. First impressions can be deceiving, but where Audition is concerned, I think mine is about right. This is altogether over-rated.

And yes I did watch the ‘Uncut’ version – which in light of the events seems a strange descriptor.