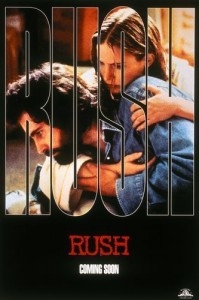 In the 90s it seemed there was a new ‘undercover cop in too deep’ coming out every year or two… Jason Patric seemed to be in most of them.

In Rush he is experienced undercover vet Detective Jim Raynor, working several cases at once in a sleepy Texas community in the 70s that seems riddled with drug dealers and users. Raynor’s M.O. is to identify the dealers, buy from them and build evidence on each case towards one big bust in which they take down all of them at once. His primary target is hirsute club owner Will Gaines, though Gaines is notoriously guarded and – for a drug dealer – quite sensible in that he never does anything publicly. Indeed Raynor has only suspicions to report where Gaines is concerned, with no evidence to support them.

To make matters worse Raynor’s boss Captain Dodd (Sam Elliott) orders him to blood a new inexperienced rookie, and after watching one footrace through a chain- link fence Raynor selects Kristen Cates (Jennifer Jason Leigh) as his new partner. With both lives on the line I might demand more stringent criteria than ‘winning a footrace’, but what do I know?

We then get the usual learning the ropes montage, complete with speeches about ‘Never blow your cover’, “You’re either ‘all-in’ or you’re out”, and my personal favourite “Hey it’s my ass on the line too!”. Then it’s off to the seedy bars and small time drug buys where Raynor introduces Cates as his new ladyfriend.

The ‘in’ comes when a small time dealer named Walker (Max Perlich) with numerous connections and links takes a shine to the duo, introducing them to new contacts that deal in new drugs. Walker is gormless, naïve and all too trusting, thinking such introductions will endear him to Raynor, and perhaps allow him to slip closer to Cates, if you know what I mean…

A by-product of drug buying and maintaining an appearance of credibility is that both Raynor and Cates need to walk the walk, which results in some harrowing scenes where they must partake of the illicit substances or expose themselves as phonies. In the main fake drugs are substituted on the sly, but as they go deeper and deeper into the shady world of scungy drug deals and equally nefarious characters as Raynor himself tells Cates “It’s a fine line”. In fact both cops face their own times of weakness and vulnerability, with the very fact that drugs are addictive probably not helping much.

Even though the plot is quite well worn and the characters a little familiar Patric and Leigh are the perfect actors to embody cops as they progress through a pretty depressing environment and face their own demons as well as numerous gents with itchy trigger fingers who would as soon bust a cap as ask them for bus fare if they knew their true identities.

The film benefits from a distinct lack of shoot-outs, car chases and big explosions, with the drama coming from the story and the acting, both of which are top notch.

Perlich is good as the unwitting stoolie, William Sadler has a plumb cameo role as a lecherous and greasy dealer in a one on one scene with a suddenly vulnerable Cates, and Elliott is his usual self – that being a caricature of Sam Elliott.

Patric went on to make the same movie over a decade later with Narc, itself a step above Rush and a film that I wholeheartedly endorse. That being said I also quite enjoyed Rush and thought the straightforward storyline and lack of quote-unquote action was more than compensated for by the acting and effectiveness of the plot.

And for those of you that wonder if Rush is a drug movie? Well Jimi Hendrix plays ‘All along the Watchtower’ in one scene.

Final Rating – 7.5 / 10. Patric and Leigh seem so authentic at times that I demand they be randomly drug tested on a monthly basis. Rush isn’t a Great movie, but it is grittier and more effective than many.