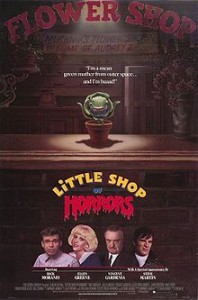 Pretty bland effort of a poster.

I’ll short-cut this: If you think a giant puppet-plant singing funky musical numbers including ‘Mean green mother from Outer Space” to a gormless, nerdy Rick Moranis and a ditzy blonde with her nips at ‘10 and 2’ is funny you’ll probably get something out of Little Shop of Horrors. If the previous sentence had you reaching for the mouse then perhaps you are better served moving on…

Cartoony all the way, Little Shop… is based upon a stage play and directed by a prominent muppetteer Frank Oz. Every 5th line seems an excuse for a lavish musical number, and every bit part is filled with a comedian looking to squeeze every laugh that can be mustered from their precious moments onscreen.

In sketchy downtown some-city USA (where “depression is status-quo”) nerdy and shy plant store assistant Seymour happens upon a magical plant after an eclipse of the sun. Clumsily dubbed Audrey 2, after Audrey the plant arranger that he lusts after, the plant immediately brings the struggling store renown, with customers flocking to see it and the media rushing to talk about it.

After the plant gets sick Seymour lucks out with a solution – human blood – initially his own… The plant grows. Thrives even. Thirsts for more.

Of course it sings. Why wouldn’t it? 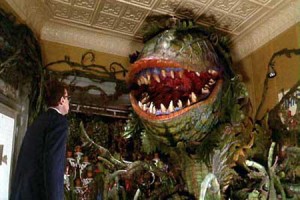 As Audrey 2 grows Seymour finds fame and renown, but as the plant continues to grow unabated on a diet of… other, demanding more and more, desperate measures are required. 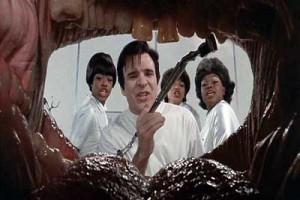 Not an atypical scene at all.

Cameos abound also, notably the afore-mentioned Martin as a sadistic, violent and mysogenist dentist who steals the film in a quarter of an hour. Bill Murray also gets laughs as a patient who longs to be ill-treated, John Candy is a Radio DJ and James Belushi is an obnoxious, opportunistic businessman.

Back to the plant; it seems odd that a film featuring an otherworldly creature in plant form that finds sustenance from blood and flesh might not be the central part of the film, but Audrey 2 really isn’t. The core of Lil Shop is the fun, frequent and above all spontaneous songs that populate the flick. Homeless people become back-up dancers, random passers by guest vocalists and three black women show up time and again to sing the plot forward.

The lyrics are at times quite dark if you think about them, and sound nice and funky if you don’t…  (As an aside friends of mine had a song highlighted at their wedding reception where the lyrics referred to suicidal thoughts. We don’t always listen carefully enough.)… but all in all Little Shop of Horrors is a an enjoyably lunatic film, with catchy songs, let it all hang out performances and eye-catching – but more importantly – funny cameos that propel the film. I remember it was funny and original in the 80s, and damn if it isn’t worth a look now.

Final Rating – 7.5 / 10. Possibly the best singing-talking-alien-plant film musical/comedy since… I can’t think. I’m too dizzy from all the hyphens and slashes. Give Lil Shop a shot.