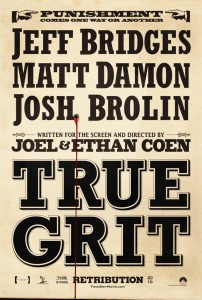 The blood just reeks of marketing.

Mattie Ross, the main protagonist and driving force of the Coen Brothers latest release True Grit, is one of the more intriguing and noteworthy characters of cinema in recent years.

Mattie is 14 and makes her own decisions, but I wouldn’t call her precocious, as that suggests a certain youthful exuberance. She is well spoken, polite but extremely blunt and concise, where there is more than one option available Mattie selects the one most likely to get results, regardless of how extreme or difficult it might be – in negotiations this often involves suggesting that lawyers need to be contacted.

Mattie is not exuberant and definitely doesn’t rush to decisions. What she is though is headstrong and most definitely determined.

We are not given any indication of “this is just how Mattie is” or if this determination and single mindedness is borne from necessity, at least over the course of the few days over which True Grit takes place once Mattie sets her mind to it she will do whatever it takes to get the job done.

When we first meet Mattie she is traveling to arrange for the transfer of her Father’s corpse back home. Mattie knows exactly  how, why and who was responsible for his untimely death, and cannot rationalise just why no action has been taken or indeed appears likely to be occur.

Mattie hears from the horse’s (Sherriff’s) mouth that the law have no intention of pursuing Tom Chaney, the man responsible. So she swiftly makes a decision and sets to making it so.

First Mattie performs some hard nosed negotiations with grown businessmen who initially write her off as a young kid but fast learn that it is they who are out of their depth. The next step is to find a suitable man to hunt down Mr Chaney – who has fled to the badlands. In her research Mattie is told of three local bounty hunters who might take the job; the first is fair but not perhaps efficient, the second gets results but might not totally be the most ethical, and the third… I can’t remember.

In any case Mattie opts for Box No. 2. Enter Rooster Cogburn (Jeff Bridges). 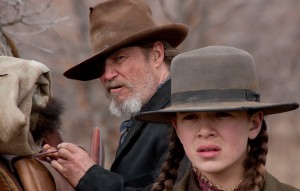 Cogburn is in his 60s and is a straightshooting unsociable drunk known for shooting first and asking questions later. He too fails to take Mattie seriously and takes some convincing to even accept the job. Once he does though he is less than ecstatic that Mattie wants to ride along with him to “protect her investment”, stating that his role is not to babysit a teenage girl whose only previous experience was camping trips with her late Father.

However of course it was always destined that Mattie would accompany Rooster on his hunt. They are also joined by a younger man named Le Boeuf (pronounced Luh-Beef, perhaps to distance himself from one Shia?) a Texas Ranger who reminds both Mattie and Rooster of his credentials all too frequently, perhaps as a sign of insecurity and a need for acknowledgment.

Along the arduous trek we are given indications that Mattie really is but a child – granted she is whip smart and mature beyond her years – but still a child when bullets fly or times get especially perilous.

Rooster on the other hand has seen almost everything before. He knows there is no foolproof way of doing things and that even though Mattie has a plan that there is no guarantee that the chips will fall in their favour.

In essence both Rooster and Mattie are extremely logical creatures, Mattie’s logic is based upon facts and assumptions, while Rooster deals in more real world situations – where sometimes riding towards a group of armed men and acting like a lunatic is the best option.

If Rooster’s horse had a bumper sticker it might say “Shit Happens”.

On the ride the three amigos bicker, argue and attempt to one up each other, Mattie wants it known that she is no different to the more experienced riders, and Le Boeuf and Rooster try to one up each other – leading to an amusing game of drunken skeet shooting with slices of thick bread.

The film is quite straightforward, especially for a Coen Brothers creation, and as it is a western the intrepid hunters encounter various odd and/or nefarious characters along the way and eventually do come face to face with their prey… though the events and actions along the way don’t really follow the old school bang-bang, clutch one’s chest as you fall off the saloon balcony sort of thing.

The dialogue is top notch, if a little strange at first, all the characters speak in quite a formal way. I initially wanted to write this review in a similar fashion, then I realised that my forte (if I have one) is cracking bad jokes – not structuring efficient critiques in period accurate language.

Jeff Bridges is gruff, ornery and mean as Rooster Cogburn, though at times he seems happy to have company and becomes chatty and even a little lighthearted, his blunt statements and frontier logic provide moments of unexpected levity. Le Boeuf is serious and well meaning, if perhaps a little unsure and insecure of his true capacity at times.

But True Grit is Mattie Ross’s story, she is stelly eyed, eloquent and a force to be reckoned with. At a time when most Hollywood starlets in their early teens are working through their first stint in rehab or choosing what to wear to the Bieber concert Hailee Steinfeld is merely announcing herself Ellen Page-style as a future star, her performance as Mattie is poised and not distracting one bit, if anything she steals scenes from Matt Damon and plays a great straight foil to Bridges gruff drunken ramblings.

Without Steinfeld this no doubt could have proven an equally efficient and entertaining movie, but having seen her performance it is hard to imaging anyone else in the role.

Final Rating – 8 / 10. I knew this would be a good film, I just didn’t think I’d end up liking it so much. It’s too straightforward to be deemed “great”, but don’t let the fact that it’s a western prevent you from checking out True Grit.