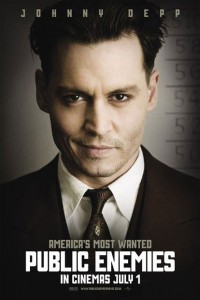 The smug look that only comes from being successful, rich and good-looking.

It is 1933 and Chicago is still suffering through the tail end of the Great Depression, money is scarce and times are tough for all.

(Johnny Depp is) John Dillinger: young, charismatic, good looking, egotistical and extremely self confident. Dillinger gets what he wants, women, fine clothing and accessories. He funds all of these things by robbing banks and remaining 5 steps ahead of the inept police force at all times, often by crossing state lines where the local police are powerless. Dillinger revels in the notoriety that comes with being a renowned criminal, and is savvy enough to realise limiting their actions to robbing banks  – and not taking hostages or killing innocents – is the key to maintaining public sentiment.

(Christian Bale is) Melvin Purvis: the new leader of a taskforce picked to hunt down the most dangerous of criminals. Purvis is confident, analytical and incredibly determined. Purvis has a solid track record of tracking high profile criminals and either bring them in or bringing them down. Unfortunately the rest of the police force aren’t similarly well-equipped to handle such important police work, which is part of the reason Dillinger and gang remain free men.

Public Enemies follows the activities of these two men over a period of time, mostly Dillinger it needs to be said, as they cross paths and attempt to outdo one another in a high stakes game of cat and mouse.

Dillinger’s weakness for the finer things in life provides Purvis and his squad with a vulnerable point when Dillinger decides a young Katy Perry lookalike is to be his new woman, which he announces to her by informing her “You’re my lady”… and I’m only just paraphrasing. Dillinger’s determined loyalty to this young woman means that he is constantly coming back to be with her, something the cops learn early in the piece and anticipate.

When the Mob become more than a little upset that Dillinger’s activities are drawing the ire of too many law enforcement agencies from all over the country they put the heat on Dillinger and tell him to lie low, and that previous safe houses are no longer available to him or his men. Now more out in the open than ever before the smart thing to do would be to move away or give the game away – but that wasn’t the Dillinger way…

While it must have been fun to fang around in those old big black towncars with guys holding tommy guns standing on the skirting boards and hanging on for dear life it just isn’t that gripping as an audience member.

Similarly running around shooting thousands of blanks at other actors while wearing cool hats and long trenchcoats might have been a blast for the actors, it just doesn’t relay especially well onscreen.

This is exactly the same problem that faced Ridley Scott’s Robin Hood; when you tell the same story again and again it just gets a little stale. At worst that results in Robin Hood, but unless you change the mix up or add something new to proceedings the best result is what we see here, a solid period drama that is better than you think it might be – but exactly what you thought it would be.

No-one stands around gawking at the miracle of Compact Discs anymore. Although it was a design breakthrough at the time technology and time has moved on. There are newer, cooler and flat out better things out there.

With Public Enemies Michael Mann showed us a CD and expected people to react like it was the Japanese launch of the ipad.

Final Rating – 6.5 / 10. At one point Dillinger gets bored and on a whim walks into the police station and into the very department assigned to hunt him down. If that is supposed to be “based on a true story” then so is Avatar.

Aside from that Public Enemies is solid, well acted, too long – and bland.