He got caught (he then got burned)

Now he hunts teens, in their dreams,

‘N kills them shorties, all in turn.

Freddy is a serial killer who kills teens while they sleep by infiltrating their dreams. Freddy wears a hat, a red and black striped jumper and has a glove with knives for each finger on his right hand.

Everyone knows the Freddy Krueger story, even if you haven’t seen the films. The original was made by Wes Craven a million years ago, it was creative, violent and funny, and more than that gave license for a million sequels, as dreams give unlimited scope for dramatic death and imagery. The original series of approximately 347 films (all of diminishing quality) were basically horror films with comedic bent, as if Craven was saying “ain’t this shit silly?” Robert Englund hammed it up as Freddy, relishing every death quip that preceded the grotesque or bizarre death of the latest pretty young teen. Every couple of years a new film would come out and be an immediate teenage staple on VHS for a few months.

Now Hollywood might not be too forward looking, but it has a good memory, and it knows that if it made money before it probably will again, and better yet you don’t have to write new material or come up with new concepts. Yay!

The 2010 remake largely eschews the comedic or tongue in cheek elements in favour of a more straightforward horror-only approach, that is right to the end where they throw in a few supposed one-liners that fall flat as they are too little, too late by then. By the way the horror parts? Not scary at all, so that worked well. There isn’t even any gratuitous nudity to distract us from the boredom of what follows.

Once Freddy is introduced every death scene is the same;

–        Teen realises that their surroundings are not quite normal.

–        Teen turns around to meet Freddy, either eye to eye (dead), or down the hall (chase scene and then narrow escape or dead). 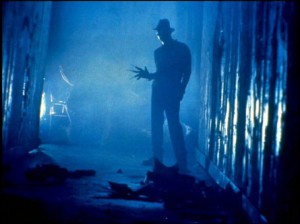 Expect to see a lot of this.

That’s it. The first death is deemed a suicide, the second a murder but after that no-one seems to care about why teens are dropping like flies. 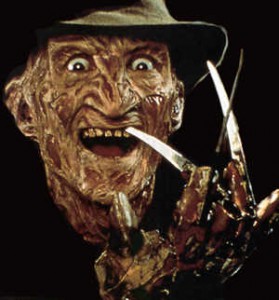 So have we really come a long way…

There is a backstory about why the teens are specifically targeted, which has to do with them all sharing the same pre-school class, but whatever. What I found most disturbing besides the lack of scares and nudity, was the fact that this was made with such little flair or spectacular visuals, and apparently the director previously directed music clips for a living! Freddy himself looks bland, I think his makeup in the Wes Craven era films was better and that was 25 + years ago. Here he just looks like a computer generated cat.

And I’m not going to suck up and say “shit film, but Jackie Earle Haley was good”, he wasn’t. He basically just kept his eyes on whoever he was killing and used his Rorschach voice, don’t try to sell me an Oscar vote on that!

Final Rating – 4.5 / 10. A horror film with no scares, nudity or laughs. How could this fail? (Geez I hope it makes approximately no dollars, but it will likely make bazillions.)

One last thing. I hadn’t seen the original films for a loooong time so I had largely forgotten most of the basics, but this dross alerted me to some alarming parallels.

To summarise, we have a creepy disfigured guy terrorising little kids. He wears silly childish clothes, a glove and a hat. The parents of the children know exactly what has happened but are in complete denial and refuse to address the issue with their children. Instead the man is killed in suspicious circumstances…

All I’m saying is that if I had ever tasted Jesus-Juice and stayed at Neverland Ranch I would be intravenously mainlining Red Bull on a daily basis.

Macaulay Culkin, Michael Jackson might just be coming to get ya!