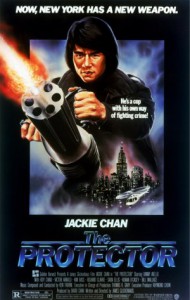 Jackie’s first real effort to break into the US market was appearing in a buddy cop film in the early 80s featuring all the clichés you could poke a stick at.

Remarkably enough for a 30 year old film Jackie’s English sounds better here than it does now! I couldn’t even notice an overdub most of the time.

As mentioned this is all by the numbers:

There is plenty of violence, a heap of profanity and even some full frontal nudity in this, no wonder Jackie doesn’t like it. The final body count is about 15, or put another way about 15 more than a normal Jackie Chan film.

The last fight between Jackie and a big white guy is actually pretty good.

Jackie is as nimble as ever, and gets to throw himself around a little bit. Nothing classic though.

This is most definitely “fish out of water Jackie”, R Rated cop stuff isn’t his forte.

Nudity, but not Grade A nudity.

Yep, but this director just doesn’t know how to use it.

Nudity? Profanity? Sex? Harsh violence? This is the anti-Jackie Chan.

Final Rating – 6.5 / 10. While it is by the numbers and most definitely NOT a Jackie Chan film, it isn’t the worst thing out there by a long shot.