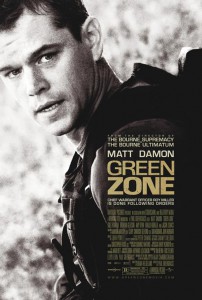 “Dammit I said use less page-breaks!”

Depending on how you look at it Green Zone is one of three things:

1)      An incendiary powder keg of a film that blows the lid on the depths of governmental corruption and the lengths they will go to protect their interests.

2)      A thinly veiled and largely fantasy based work of fiction deliberately aimed at taking cheap shots at a former US Government.

3)      A reasonably effective action flick with some political elements.

Me? I’m from Australia, so I side with the global view that there were no WMD’s in Iraq, regardless of what the US Government claimed. So I could care less now some seven years later how it happened, I just wanna see some shit blown up and maybe a clever twist or two.

I therefore see Green Zone from the No. 3 camp.

We enter the film in 2003 in war-torn Iraq. Everything is chaos, including the camera-work. Yep, the guy that made the last two Bourne films can’t seem to fit a steadi-cam in his budget for these things, meaning that everything is wonky and quick edits are rampant.

Matt Damon is Chief Miller (though the Chief part means leader of a small squad rather than thousands of men), and he and his men are scouring areas identified by intelligence as prime areas for the stashing of the afore-mentioned “Weapons of Mass Destruction”, or WMD’s. After three unsuccessful searches, all putting the safety of his men at great peril, he has had the proverbial “enuff”.

Greg Kinnear is a key member of the US intelligence team, he is hell bent on keeping the media and the public focused on the hunt, and not the lack of success. The media are growing a little toey at the limited screened information being fed to them and demand the identity of “Magellan”, whose information ultimately led to the greenlighting of the initial invasion.

When Miller shows his skepticism at the accuracy of the intel at a briefing he is pretty quickly shut down, although afterwards he meets a new guy, Martin Brown of the CIA. It turns out Martin Brown (Brendan Gleeson) is equally suss about what he hears versus what he sees, although he is himself cagy about showing the full breadth of his knowledge. (And my wife says he has big ears.)

To save the plot from petering out an Iraqi civilian named “Freddie” (rather than an American audience having to put up with a dang foreign soundin’ name! Although in saying that I will call him Freddie too as it is easier to type.) shows up claiming that some no-goodniks are meeting down the road, and why don’t the soldiers look into that rather than searching abandoned factories and empty buildings.

Miller, being the guy on the poster, does just that, taking some men and Freddie,and performing a well-executed raid that almost nets them a big fish. They find out that the guy that escaped is indeed a high up in the Saddam heirachy, using the cunning technique of matching him to the deck of cards put out around that time featuring the top 52 odd threats.

The guy was the Jack of Clubs, and that is what I will refer to him by here.

After the raid Miller questions a hostage and is seconds away from uncovering key information when (literally) out of the sky comes some “stoopid high ups” that take both their hostage and their opportunity to make a difference.

From this point on Miller is forced to choose between the two US sides: one wants the truth, the other can’t afford for the truth to come out.

I’m not sure how much of this is fanciful and how much is based upon fact, but watching the movie it is pretty clear which side will be favoured. Hint: the one the guy on the poster sides with. We also know, as this happened 7 years ago, that the “real truth” suggested here never was released formally.

So I’m guessing that this is another “based on true events” job. “Based” in as much as there was a war in Iraq and there were soldiers involved.

Anyway back to the war. Miller managed to hold on to a Top Secret Iraqi book containing valuable information in the right hands, thereafter Miller becomes very much embroiled in all goings on to the conclusion.

Miller decides to go rogue Sarah Palin style and get to the bottom of all this, his squad splits, some want out, others tag along for the ride. Martin from the CIA figures that there can’t be much harm in letting Miller have a little info so he might take a crack at uncovering things, sort of like a free hit. If Miller gets killed it likely won’t get traced back to him, if it works all the better.

It turns out that the book contains information that may or may not lead to the identification of Magellan, which may lead to more information being available than certain parties are comfortable with.

Certain media members get savvy at a soldier talking to the CIA and they get pally, and Greg Kinnear just wants all of this to go away, or he’ll have to put a stop to this unpleasantness. He is basically the standard “quiet yet extremely connected Government figure that you don’t wanna mess with”, just like the guy in the recent Mel Gibson Edge of Darkness movie, although that guy was a little on the side of good, Kinnear is…

There is much inter-departmental pissing and moaning, much one-upmanship and political posturing, but as I keep saying when the guy is on the poster he is the horse to put money on. Yet again we have a situation when one guy in a couple of days can out-think multiple US intelligence agencies by himself and solve shit, even though if this were real it would require a million minor coincidences in a row to be possible, with some massive coincidences to be fact.

Final Rating – 7 / 10. Hey I said it in the first paragraph “A reasonably effective action flick with some political elements.”

One little spoiler below. YOU HAVE BEEN WARNED!!

Right, once the final meeting has been had, Miller lets “Magellan” know that his facts were willfully misreported to the media to justify starting the war, for what we are not told.My question is this: How dumb is the Magellan guy that when Miller tells him he is pissed off and surprised? All this time with US missiles raining down and his fellow Iraqis being gunned down did he never think “Gee, that’s a bit of an over-reaction to the news that Iraq cancelled our WMD projects!”?

No, he waits until a US grunt tells him and thinks “Ooooooohhhhh. Oh. OH!!” and then it twigs and he flies into a rage. Pretty dumb filmmaking I would suggest, they just want the big twist to be a surprise to everyone I suppose.