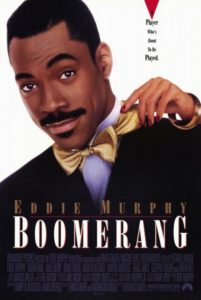 The 80s showed us Eddie Murphy could not funny (and how). Interviews from the time showed that he could do smooth. It wasn’t until Boomerang that anyone wondered if he could do romantic.

Boasting a Trumpy vibe is hardly a good start, but Boomerang tries to ward off accusations of sexism by having almost every character oozing hormones from every pore.

Sure advertising executive Marcus (Murphy) seems hell bent on nailing everything in high heels in this film, but he can’t be that bad if everyone else is also openly salivating at anything on two legs.

When Marcus beds an ancient sexual predator played by Eartha Kitt we’re supposed to think it is hilarious. Ditto when a lunatic played by Grace Jones lifts her skirt in a crowded restaurant and asks loudly “how can you say no to this pussy?”

To further show just how out of touch this all is, Halle Berry plays the least sexual, most homely, reserved mousy character in the film; proving the kryptonite to Marcus’ unending horniness is… Love.

He bangs 37 hotties and we’re supposed to feel bad for him when the woman he suddenly decides he loves dumps him – for having an affair! Poor, poor, pooooor Marcus.

Smoove. I didn’t feel as disappointed in Boomerang as insulted. Not because I know all about romance and love and all that stuff, but because I can tell that none of those themes are on display here; and also, because there is no humour to wallpaper over all of those cracks.