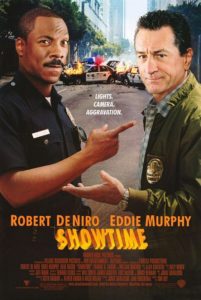 Mitch (Robert de Niro) is a police ‘lifer’, a dedicated no frills detective who gets things done. As Mitch himself would say ‘it isn’t about sliding over car bonnets or firing two guns at once. It is about thorough analysis and ongoing routine, backed by mountains of paperwork’.

Trey (Eddie Murphy) hasn’t got time for paperwork, not with all of those car bonnets to slide over and guns to fire two at a time.

They are thrust together when an eagle eyed producer Chase Ramsey (Rene Russo) realises that these two mismatched law enforcers just might have the recipe for reality TV gold. The old dog vs the airhead. The no nonsense vs the all nonsense. The real vs the surreal.

Ramsey wants the ‘realness’ that Mitch is sure to provide and the ‘spark’ that Trey cannot fail to generate.

So Mitch and Trey continue being real and sparky, while the film itself goes absolutely nowhere new, settling on remaining fake and flaccid until trying to force a climax with the arrival of a ‘super gun’ weapon that could lay waste to countless innocent civilians and law enforcers alike.

The Hard Way made almost this exact same film and just missed. Showtime doesn’t even come close to providing anything real. Not even a single spark. It is never funny. Not even once.

De Niro looks suitably surly and bemused as Murphy somehow under acts his own over the top character into obsolescence. For anyone who thought de Niro was an under-appreciated comedic talent please consider this exhibit A in the case against. For anyone who ever wondered if Murphy gave up trying when that sweet Shrek donkey money started rolling in consider this exhibit A in the case for.

From minute One to minute Ninety I loathed this experience, and I wouldn’t recommend anyone test their cinematic resolve with this film.

Showtime is the kind of lousy that has me roll me eyes when some Hollywood ‘insider’ decries falling box office receipts, as if the blame should somehow be passed to a viewing audience fucked over time and again by shit such as this.

Final Rating – 4.5 / 10. This might be thought of as a nudge-nudge, wink-wink sort of Hollywood film that lampoons itself. Only the nudge is to see if you are awake, and the wink is to distract you from the fact that you just got took.

While I try to throw a joke or two into proceedings when I can all of the opinions presented in my reviews are genuine. I don't expect that all will agree with my thoughts at all times nor would it be any fun if you did, so don't be shy in telling me where you think I went wrong... and hopefully if you think I got it right for once. Don't be shy, half the fun is in the conversation after the movie.
View all posts by OGR →
This entry was posted in Crappy Movies, Eddie Murphy, Film, Movie Reviews, Superstars, The 7th Level of Suck. Bookmark the permalink.