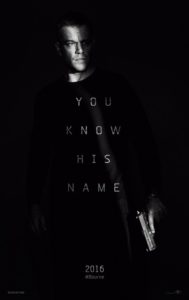 As Jason Bourne opens our titular sensibly dressed hero is Rambo-ing it by engaging in no holds barred fights for money somewhere in Europe. Not the best way to remain off the grid in this world of viral videos and an MMA soaked market full of testosterone junkies, but it seems to be working.

But even when Bourne is chillaxing – for him – he is being pursued. Pursued by those who would seek to help him in Nicky Parsons (Julia Stiles), those who would harm him for the damage he could do to the CIA, including Director Dewey (Tommy Lee Jones), and those who want to find justice and help their careers, including Heather (Alicia Vikander).

And as with all of these films, when one finds their target they all do almost simultaneously, leading to pompous dialogue such as “this is bigger than you and I”, “for the greater good” and ominous warnings like “you have 35 seconds to pack and leave” and “use the Asset to take down the Package”.

Across Europe end eventually the United States they follow. There is an epic setpiece that takes place in the midst of a soccer riot that threatens to get out of hand, and another that causes much collateral damage to the garishly lit streets of Las Vegas.

In between we learn more about the backstory of Jason Bourne and the true motivations of some who would see him dead. For his part Matt Damon is almost a supporting actor, with most of his pursuers getting the expository dialogue and the expectation of prepping better plans so as to catch him next time.

Jason is Bourne to run here.

To run away from the outstretched hands of his would be captors, to dodge the bullets of would be assassins and to stay one step ahead of the career opportunists who see his collar as an instant promotion.

For what he lacks in chat, Bourne still makes up with actions. He can knock a man out quicker and with greater regularity than anyone else in film, and he can take a hit as well as he hands them out.

The enduring beauty of this no frills franchise is that it can be enjoyed in layers. Those more committed and vigilant can spot the cues and immerse themselves in the intrigue of corruption at the highest level. Others, like me, can confine our brains to recognising the bad guys and waiting for Jason Bourne to deliver their comeuppance.

It’s not a world that any of us live in, but for a couple hours it is fascinating and – thanks to the taut and impactful action sequences – often compelling.

I don’t think generally think much about the Bourne franchise. When I hear the is a new one imminent my reaction is generally to shrug and move on with my life. To my recollection I have never seen a Bourne film in the cinema.

Final Rating – 8 / 10. And yet I always find myself enjoying them much more than I expected.