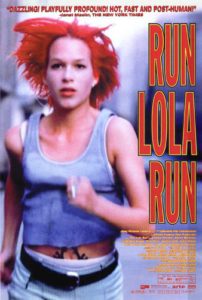 It’s a simple premise; Lola must hurry across town to save her boyfriend Manni from reprisals due to a drug deal gone wrong.

Lola wears green pants, a gray tank top and bright red hair. She has no car and no money, and Manni needs one hundred thousand Marks to bail him out – which I imagine is a lot because I can’t be bothered looking it up…

Yep Lola’s tale is the same as that often told. The difference here is in the telling.

We see no less than three run throughs of the attempted rescue, with each involving the same miscellaneous group of regular oblivious citizens who Lola encounters in different ways, and Lola’s own indifferent father. Same journey, similar encounters, different outcomes.

A pulse drives the action, with Lola perpetually in motion, and quick edits, cutaways and even interspersed cartoons serving to maintain the breakneck pace.

At a lean eighty minutes Run Lola, Run is quick and clever, creative and visceral. It is ultimately a film that doesn’t demand repeat viewings, but the first trip is at least an exciting sprint to the finish line.