The Legend of Tarzan (Review) 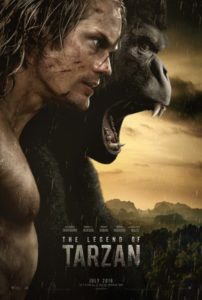 I spent a good twenty minutes wondering if The Legend of Tarzan was a sequel to a film that somehow slipped by me. After a bland preamble yet again establishing scummy white guys as the enemy of the republic of Congo, we zip to London to find Tarzan as… no longer Tarzan.

“But I’m not Tarzan any more!”, no-longer-Tarzan (Alexander Skarsgard) says something like to someone that might have been Jane (Margot Robbie) – because she’s there too. Wait what did I miss? He’s already Tarzan? She’s still Jane of course, but they’ve already done the whole “me Tarzan, you Jane” bit? So what’s left then?

Well as it turns out not much. Once Tarzan-Again and Jane (and for some reason Sam Jackson as George, whose role seems to be to say the blindingly obvious) arrive in the Congo to inspire the apparently hapless native people sufficiently to have them fight back against the natural resource thieving Europeans fronted by the dapper Rom (Christoph Waltz – who unfortunately never gets to bare his teeth), the plot could be summed up as “Yo Tarzan they got yo girl. Whatchugon do now!?!”

And what Alexander Skarsgard’s Tarzan can do is control computer generated creatures.

He can converse with gorillas, cuddle wild lions, and you can bet he can chat up an alligator at short notice. Not a typo.

He can also conjure a strategically placed vine from anywhere and engage in unremarkable action sequences that elicit no emotional response.

In actuality this entire film is misguided. It ignores the actual ‘legend’ which is the origins of the boy one with the jungle, and instead takes a pretty dull Londoner and has him rip his shirt off a few times while I wonder how many others in the audience think he looks exactly like Alexander Gudonov from Die Hard. I had about two hours to think about that, because the action and drama sure wasn’t distracting me. In fact I think I was as interested in this film as Samuel L Jackson was in appearing in it, and I think I saw him checking his bank balance on his phone in one scene to make sure the cheque had cleared…

Unlike the Congo this film doesn’t appreciate its natural resources. It lets Margot Robbie stew in a cage for half the film. It lets Christoph Waltz set up a character with no real pay off. It allows Sam Jackson to get paid to be an onscreen narrator, and most of all it lets young Skarsgard and his chiseled abs be outshone by frankly generic and forgettable cgi animals.

Actually ‘Most of All’ it opts to mislabel what is a formulaic tale instead of tackling the actual Legend known worldwide.