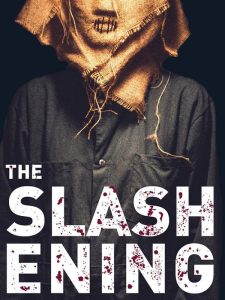 It was actually over a month ago when an email popped into my intray. I have no idea how it came about but the email informed me of the arrival of a new film entitled The Slashening, with a link for me to watch the film. Puzzled but flattered, I committed to watching the film as soon as I was able, and then a funny night happened.
Six weeks went by and I had forgotten all about it.

The Slashening is the lowest of low budget, costing less than many would spend on a family holiday. Attempting to blend comedy and horror, with liberal lashings of gore and sexual innuendo in equal measure, the film opens in the daylight, where the low budget and amateur acting are harder to conceal.

After the two groovy swingers and their balding gardening boy prey are dispatched, the film moves to the meaty bit.

Much time is spent trying to poke fun at the horror slumber party conventions and the formulaic shenanigans that go on in such indulgent times, with the never ending stream of hapless pizza delivery guys underscoring all that the film aspires to be.

But while outside carnage awaits, the girls and gals inside are oblivious to all. At least for a long while, because walls, doors and common sense can only hold back The Slashening for so long…

It is obvious that the filmmakers left it to the cast of amateur sketch actors to carry the first half of the film, which is filled with bawdy comments and mostly amusing dialogue with three or four gals all trying to steal the scenes in which they appear. But in the second half whatever shoestring budget accumulated in the swear jar was put to good use with a few gore filled minutes, one which unfolds over a protracted period, also for comedic effect.

In terms of bang for the buck this is better than you would expect. It reinvents nothing but rebuilds the Frankenstein’s monster of bits of other classic horror films into something patchy but effective.

Let’s just say I was expecting much worse than this. The opening scene might have been tacked on to pad out the film’s eighty minute running time – and there is an actor’s name misspelled in the credits – but for entertainment value The Slashening leaves nothing on the table. It can be called many things, but above all it is earnest and ultimately admirable.

Final Rating – 6 / 10. It won’t change your life, but it might brighten one of your evenings.

While I try to throw a joke or two into proceedings when I can all of the opinions presented in my reviews are genuine. I don't expect that all will agree with my thoughts at all times nor would it be any fun if you did, so don't be shy in telling me where you think I went wrong... and hopefully if you think I got it right for once. Don't be shy, half the fun is in the conversation after the movie.
View all posts by OGR →
This entry was posted in Film, Movie Reviews, Special Requests, The Grey Area. Bookmark the permalink.