Because not all comic-book derived superheroes are created equal… 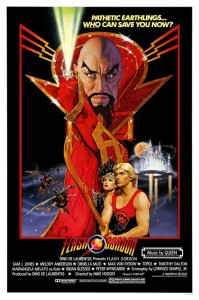 To this day I can’t hear the words Flash Gordon without hearing ‘FLASH! AAA-AAAHHH!!‘ in my head.

This tale of an American sporting hero thrust into an interstellar battle between crazy species was retro kitsch before that was a thing, it was hilariously dated even before it was even released.

That said it maintains an odd attractiveness with bright colours and garish characters in a huge number of forms, with Ming the Merciless remaining menacing and regal as ever.

Flash might be a football player turned intergalactic superhero, with a beautiful woman on his arm that he met a few hours ago on a plane, but his story is the stuff of legend.

(Can Flash save the day?)

For anyone who ever wondered why Hollywood free more and more cautious with audacious big budget films and crazy plots, here is Exhibit A. At one stage Flash Gordon was one of the most expensive films on record, and while you can see the money, the care factor with the plot and dialogue is not nearly as evident.

This has lead to the film finding cult value to those who believe if you’re going to go large, go real large. No one can deem this a failure without dubbing it a spectacular failure.
So at least that is something.

Final Rating 6.7 / 10. There is value here, but not in the way it was intended. Go Large you incredibly wonderful day-glo man. 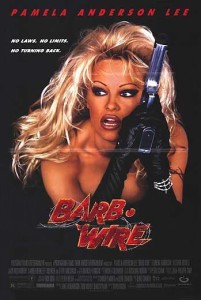 And let’s just say that as an action heroine, Pammy makes a great pin up. And as an actress she makes an even better gif…

* They aren’t but they totally are

There is a scene when Pammy reminisces about the time she was a soldier that is amazingly hilarious. The opening shower indulgence scene is far more of what the punters were hoping for, but after the first 90 seconds of T&A those guys are up for 90 further titless minutes. 90 minutes which are terrible and dumb, but not as much of either of those things as you would guess after looking at the preamble.

Final Rating – 5 / 10. For those wanting more of Pam in the nude, see Google. For one wanting a fun dumb action film, see… elsewhere also. 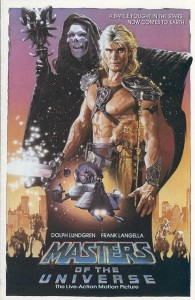 Masters of the Universe

Who could have thought that a big budget movie based upon kid’s toys could fail? I mean we have everyone’s eighth favourite muscly foreigner in Dolph Lundgren and a dozen aspects quite clearly – and blatantly – ripped from Star Wars, and a plot that makes absolutely no sense. But really, who could have thought…?

The bat-tle is fought on Earth

Not so much on film

First Skeletor (Frank Langella swinging for the fences) has the Key to all power, then he finds that the little rat like hobbitty thing made another. This makes his key not nearly as powerful. Or something.

Then there’s a portal, which is apparently a cost saving portal which magics everyone to Earth, where they can wander about shitty sets and dimly lit back alleys, pausing occasionally to fight clumsy Stormtroopers, who fire lasers which He-Man deflects with his lightsaber… sword.

Putting intergalactic beings in Earth’s confines is the same tactic as was used to bring historical figures to present day in Bill and Ted’s Excellent Adventure. But at least that was funny. This is tragic. When Skeletor arrives it looks like he is on a huge float, the Master only of the intergalactic gay pride parade.

One last thing, when several characters wearing clumsy masks with lips that don’t move remotely in sync with the dialogue, it seems incongruous that Skeletor – whose face is a skull and therefore rigid bone – can move his ‘lips’ with every word.

Still, by embracing all that is ludicrous with such a premise and imbuing Skeletor with some sense of menace, it is Frank Langella who steals the film, despite Dolph’s protestations about ‘HAVING THE POWER!’

In a world where superhero films have peaked and are becoming lazier, it is refreshing to know it could be worse…

While I try to throw a joke or two into proceedings when I can all of the opinions presented in my reviews are genuine. I don't expect that all will agree with my thoughts at all times nor would it be any fun if you did, so don't be shy in telling me where you think I went wrong... and hopefully if you think I got it right for once. Don't be shy, half the fun is in the conversation after the movie.
View all posts by OGR →
This entry was posted in B Movie Haiku Reviews, Film, Movie Reviews. Bookmark the permalink.