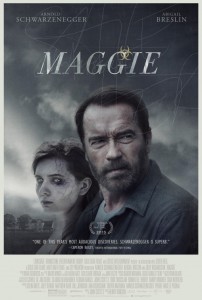 Maggie is an incredible tease of incredible proportions. To start with it has the greatest action hero of our time in Arnold Schwarzenegger in the lead, then markets itself as a zombie film.

Then it brings the man who quipped and killed his way through the 80s and 90s and establishes several potential flash points; a virus has taken hold of society. No-one is to contact the infected. Wade (Arnold) learns his daughter Maggie (Abigail Breslin) is infected. He searches for her. He finds her. And… All goes well and he gets to take her home.

At home, potential issues like other children are removed. We learn that the infected have 6 to 8 weeks on average where there condition deteriorates, but during which time they are mostly fine. Then comes ‘the turn’, after which it is strongly suggested that they move to ‘quarantine’. For those who aren’t willing to give up their loved ones to quarantine, the options are simple; DIY or we’ll come and get the infected and ‘quarantine’ them for you.

… Come on. I think we all know what ‘quarantine’ means don’t we?

Back to setting up Arnie for potential fun and us the viewers for sure fire disappointment. Forget the stand off between Arnie and the imposers of unfair rules. Forget the breathless search for the cure across zombie infested wastelands. Forget above all the Walking Dead style bloodbaths and eviscerations.

Instead expect long searching glances, emotional anguish and slowly spreading rashes. These might all well be genuine issues relating to a loved one experiencing painful zombie-like symptoms but…

It was bad enough when it was decided that all zombie movies needed a message, but now they are Lifetime movies full of white knuckled hand wringing and sadness?!?

And there is no more mixed message than big Arnie himself. Sure he is now in his 60s and no longer the super buff ass kicker he once was, but this is like marketing a Stephen King reading and having him run down a takeaway menu. You shouldn’t blindly expect something, even if it is strongly suggested by that person’s very presence.

Maggie is an often dreamy film, languidly paced with a grim tone. As a drama it is probably ok, but as a zombie action film – it isn’t one. Sorry Arnold I’d rather broken action than moribund melodrama.

Final Rating – 5 / 10. As disappointed an old school Saturday ‘movie night at home’ experience as I have had for a long while.