All is by my Side (Review) 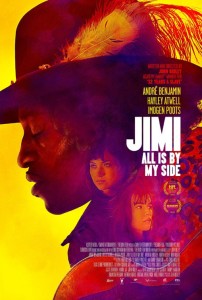 As the film opens Jimi is already a guitar prodigy, but he exists in a genre that seems to have no need for him. The easy rock and roll relies on structure and conformity, and his voice is seen as too hoarse and dull to be expressive or to front a band.

Without his guitar in hand Hendrix is shy and uncomfortable, with it he is a different beast altogether, confident and composed, with a demeanour that screams ‘I got this’. The guitar completes him, and any observer with an eye for starpower recognises this.

Linda Richards (Imogen Poots) sees this. She knows the signs well, watching her boyfriend Keith Richards of the Rolling Stones for many years. The film suggests an attraction between Linda and Jimi that goes beyond admiration.

Richards knows that Hendrix deserves more than being relegated to a role as a session player or second banana. She nurtures his confidence and proclaims his genius to anyone who will listen. So she is obviously more than a little perturbed when – just as Jimi seems to be getting the vital break that she lobbied so hard for – that Kathy, (Hayley Atwell) a woman with curves that catch the eye and a willingness to use them – takes Jimi from her side and to her bedroom.

Where Jimi might have needed Linda Richards to discover and encourage his gift, he finds that Kathy is less interested in guiding. She wants to lead. While ‘guitarless’ Jimi is an affable but introspective man happy to go with the flow, in a recording studio or onstage he is singular and determined. The combustible relationship between the pair is the core of the film, and results in love, tension and drama.

Aside from this though Jimi: All is by my Side is a surprisingly flat film without distinct highs or lows. Too often it seems hellbent on showing the famous faces that Jimi encountered during his ascent, with the screen freezing and a subtitle pointing out who this random famous person is. Unfortunately aside from the guys who ultimate joined Jimi to form the Jimi Hendrix Experience, only Eric Clapton interacts with Jimi in a meaningful way, and even that interaction causes him to leave the stage to stand in awe.

Andre Benjamin of Outkast fame embodies Hendrix, even though he is over a decade older than Hendrix was as depicted here. He nails Hendrix’ sleepy drawl, and makes enough of a fist at Hendrix’ left handed guitar mastery that you can be momentarily fooled.

It’s probably a brave decision to make a film that focuses on the years between Jimi Hendrix discovering his genius and the music world coming to the same realisation. In fact the film ends just as Jimi was about to walk on the stage that would announce his name. the decision is certainly a perplexing one, especially once you realise that there will be no original Hendrix recordings across the two hour film where his music obviously plays a central role.

Despite these perplexing issues, Jimi: All is by my Side is a solid film and a mostly compelling portrait of a legend in the making, though undoubtedly more a film for the Hendrix fan than the casual observer.

Final Rating – 7 / 10. A character study that is prevented from using Jimi’s greatest gift – his music – to sway your opinion.