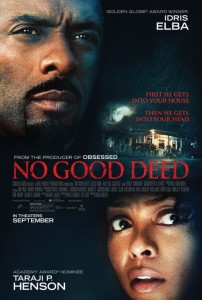 Imposing figure Colin (Idris Elba) is always simmering like a kettle, but he is so accustomed to keeping a straight face that it’s hard to tell. The eyes though. The eyes gleam even while the chat is lifeless. They become round and flicker when enraged, and the lids droop and the colour washes away when on autopilot.

Colin begins the film in the midst of a long prison sentence, having failed to justify an early parole due to his violent past. Of course not many home invasion films remain in the prison system, and when Colin finds his (embarrassingly easy) freedom he sets straight to a’visitin’.

He arrives on Terry’s (Taraji P Hanson) doorstep after losing control of his car on wet roads. With Terry’s husband being out for the night she is home alone with her two young children. Despite this vulnerability, Terry nonetheless looks at the towering man on her doorstep in the middle of the night, and makes every bad decision required to generate a routine cat n mouse outcome.

The two leads do what they can with the material. Idris Elba is always a compelling figure, and Taraji P Henson alternates bubbly and composed depending on the situation. Each has their time in the sun, with the upper hand being passed back and forth frequently.

There is an unlikely – and in my eyes unnecessary – development, which neither enhances or buries the entertainment value of the film, but this is a ‘between TV series’ practice film for the two stars. An exercise in going through the motions.

Watching No Good Deed is ruthlessly efficient like a quick night out for dinner. At a lean 80 minutes it sets the table, serves the meal and lets the credits usher you out the door, leaving you technically satisfied even as the memory of the meal evaporates and the waiters put the chairs upside down on the tables.