The Ghost and the Darkness (Review) 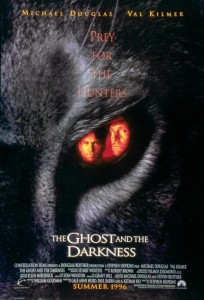 Quick story (with SPOILER); almost two decades ago my boss at the time arrived at work talking up his experience the night before at the cinema, where he watched this very movie. After making it sound so very exciting and worthwhile, he said “it was a bit slow until Michael Douglas gets eaten, then…”

We immediately groaned and ever since then ‘Michael Douglas gets eaten’ has become a phrase to be used in lieu of ‘too much information’. We even named our basketball team after it.

And for nearly two decades I could never bring myself to bother watching this spoiled movie. I even tried about ten years ago, but after a quarter hour I turned it off. The crappy story above was better than any movie about man eating lions could hope to be.

Quick story short; I watched it last night and was proved right all along.

It is the turn of the 20th century in deep dark Africa. Fearless white explorers are using the muscle of thousands of locals to open up new lands for farming. John Patterson (Val Kilmer) is tasked with building a bridge from one bit of dirt to another bit of important dirt. His only impediment having big paws and sharp teeth.

In local circles the tales of two lions, the Ghost and the Darkness of the title, are grim legend, with the beasties responsible for in excess of 100 kills, many in broad daylight and some in heavily populated areas.

Michael Douglas of ‘gets eaten’ fame, only rocks up about half way through, and yes he checks out before closing time also. In his brief onscreen time Douglas plays the hired hunter or renown, here to provide guidance and backbone to the terrified workers and locals.

Douglas chews the scenery for a half hour before… well you see where I am going with this.

The primary issue with The Ghost and the Darkness is that among the bridge building team there are dozens of firearms for use, while the two lions can only do damage when in close proximity, and because they often do it in daylight, there is ample time for the humans to cause them harm. The amount of times that a lion looks down the scope of a rifle – or could have if the dumb human would only raise the weapon – beggars belief. It is as if Patterson and associates are actively inventing new ways to botch easy kills as they go along.

While this is based on a true story, there is every chance that the lions eventually died of old age.

As pure coincidence, two days ago I was on a short holiday with my family when I ran into the old boss, now a tour guide. It seems that he is now using his knack of telling stories to make things sound better than they are professionally…

Final Rating – 6 / 10. It might have taken me almost twenty years to watch this film. I would advise you to let these lions be.