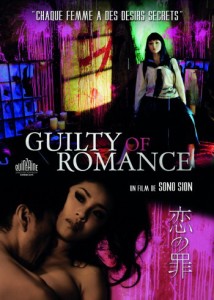 Guilty of Romance popped up in one of those ‘If you like this you might also like…’ lists. A quick look at metacritic suggested it might be more than a hack job, so I was convinced to check it out.

Guilty of Romance is a 150 minute snorer about a woman looking to be a little more than a bored housewife, and her subsequent journey to the seediest side of society. It purports to be a peer to Memories of Murder and Oldboy – but I think I watched the wrong film if that is the case.

The best 2% of Guilty of Romance is the first three odd minutes. A body is found comprised of mix ‘n’ match parts, human sections placed next to mannequin sections, with maggots writhing through the squishier bits. No-one can tell who done did it. And at this stage you think ‘let’s see where this goes’.

Well let me tell you – nowhere. The next two plus hours are a machine purpose built to generate boredom. An extremely efficient machine. Nonsensical decisions, vile and ridiculous characters and impossible coincidences. All backed by whiny fucking violin pickery that seems to exist to aggravate every synapse.

There are baffling edits and inane dialogue, and just in case you were even slightly awake, gratuitous nudity every few minutes.

I mentioned the interesting 2% above, that obviously leaves 98% unaccounted for. Well 78% is unforgivably boring, and the other 20% astonishingly awful. By the time the opening scene is again referenced and we find ‘closure’, we’ve long since forgotten where this mess began.

This film is like a university student’s first car; it starts out reasonably clean, then one discarded coffee cup hits the floor. Then a chip bag. Then a chewy wrapper. Within days the entire car is a mess, you can’t even remember where it began and it just seems too hard to bother cleaning up.

Guilty of Romance is guilty of many things, pretentiousness, tedium and aggravation, and crimes against logic and reason. Strangely what it is not Guilty of, is romance. Or entertainment.

Final Rating – 3.5 / 10. Do American critics even watch these films or do they just give everything with subtitles four stars? This is as bad as anything I have seen in years.