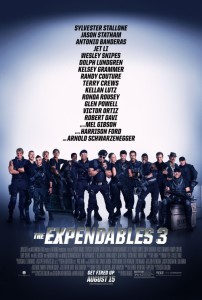 I’m amazed that this ‘dead cat bounce’ is now in the third edition.

On this occasion the Expendables – still fronted by Sly’s Barney Ross – run into two more men involved at the genesis of the crew. One Dr Death (Wesley Snipes), an angry, violent and disagreeable scumbag with a hair trigger and a lust for conflict. The other is the bad guy Conrad Stonebanks (Mel Gibson), an internationally known criminal to whom human life is irrelevant. It’s amazing how these larger than life characters can be forgotten for so long by one and all, and as soon as they reappear all they can all talk about is how intertwined their lives are…

After an ‘easy job’ (i.e. one with under 200 casualties) goes wrong, Barney decides that he needs new blood. Enter a bunch of faceless and forgettable, wet behind the ears, square jawed and determined eyebrowed young people, one an attractive female bouncer, whom Barney decides must be good value in a firefight.

Unfortunately this necessitates an interminably long ‘meet the new kids’ sequence, followed by an equally long ‘bickering, bantering and bonding’ sequence, where everyone realises they are just as crazy as each other, so why worry? Of course while they are all indeed crazy, no-one is interesting or commanding enough to warrant attention.

This new crew are so uniformly beige that they would more aptly be known as the Forgettables.

It’s ironic that the louder this film becomes, the more inner peace I found. The gunfire and explosions might be rote and uninspired, but they drown out the obnoxious noise that passes as dialogue here. The getting to know each other stuff is banal and unnecessary, but that easily trumps the preening and posturing.

Statham, Lundgren and a couple other lesser names reappear but aren’t asked to do anything beyond smirk and shake their head at how everyone else be crazy all the time. Arnie gets a slightly beefier role this time, and Harrison Ford and Kelsey Grammar find time to pad their CVs with roles that are notable only because they are in them. Jet Li returns as an afterthought and a clumsy punchline that Sly obviously feels is his nod to the modern world (Li and Arnie’s characters are gay for each other).

Again ironically, the appearance of Antonio Banderas as Go-Go, a motormouth freelance mercenary desperate for a job but unable to holster his tongue, introduces the most entertaining distraction in the film. Meant as a yammering idiot (which his character is) Go-Go is nonetheless the closest thing to amusing on display here.

Mel Gibson channels his nutbag intensity from the awful Machete sequel and his conversations with his ex-girlfriend as the loony bad guy. He is ok but unremarkable aside from the fact that his rants are free of racism and casual religious hatred.

Of course the Expendables group and franchise are all the idea and ultimately property of Sly Stallone. To his credit he continually tries to entertain, it’s just that his interpretation of what today’s teenage males like; tattoos, motorbikes, bragging and verbal sparring with the old guys from 80s direct to VHS films, is sadly off the mark.

When Sly stops worrying about what serves as cool and gets back to blowing shit up, Expendables 3 is passable. The opening train takedown scene is the best sequence in the film. Unfortunately after that finishes we are forced to spend the next hour meeting the characters and setting up the plot…

I remember going to a Billy Joel concert a few years ago. His opening words to the crowd were “I know I’m not the Bill you remember, I’m his father, but I know all his shit. So shut up and let’s go.” Sly should top denying his age with steroids, surgery and other stuff – his skin is weirdly two-tone throughout this film – and just do what he does best.

With each tired outing the name of this franchise becomes sadly more and more apt. Sly and his ever expanding clique of creaky bones and saggy skin may yet again return to wreak weary havoc upon a new generation of hapless younger foes, pausing only to pop iron tablets and to shoo children off their lawns.

But I don’t think I can stomach this diluting and tainting of my fond teenage movie memories any longer.

Final Rating – 6 / 10. The first was a novelty, the second proof that the concept was already tired, this is just reheating the same old tired stuff again.

While I try to throw a joke or two into proceedings when I can all of the opinions presented in my reviews are genuine. I don't expect that all will agree with my thoughts at all times nor would it be any fun if you did, so don't be shy in telling me where you think I went wrong... and hopefully if you think I got it right for once. Don't be shy, half the fun is in the conversation after the movie.
View all posts by OGR →
This entry was posted in Arnie Schwarzenegger, Bruce Willis, Film, Jason Statham, Movie Reviews, Sly Stallone, Superstars, The Grey Area. Bookmark the permalink.