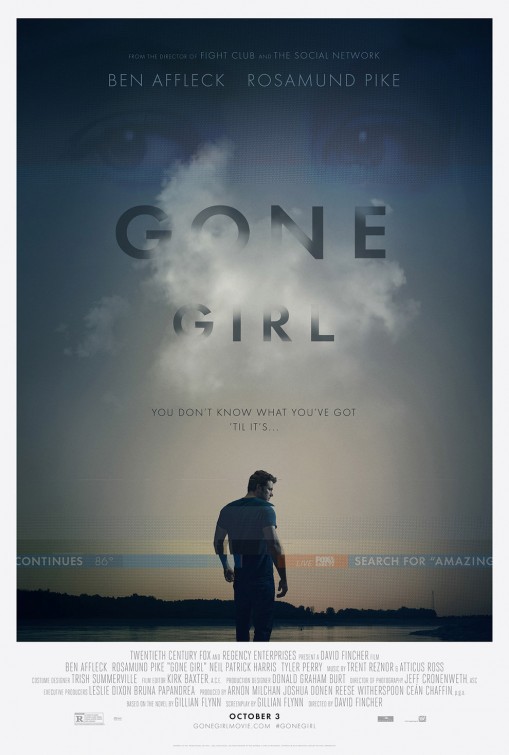 It has been a couple days since I watched Gone Girl, a film that will have more impact for those who know as little about it as possible prior to Watching, and will be recalled more fondly by those who don’t think too hard for too long once it ends.

I steered clear of reviews of the film prior to viewing, and I am happy I did, given that many are filled with spoilers to various degrees. So be aware this review outlines maybe the first 12 minutes of this 150 minute film. If that means it omits some relevant stuff it’s because it works better for you that way…

Nick (Ben Affleck) and Amy (Rosamund Pike) live in a large new house that stands out in a small town full of humble people, as well as a significant homeless population. It is Nick’s hometown, but the home and other primary assets have been purchased with Amy’s money; more specifically Amy’s parent’s money, money earned from children’s books based loosely on Amy’s childhood.

It is the morning of the couple’s fifth anniversary, and Nick arrives home to find an open door, signs of a struggle, and no Amy. With no ransom note and no other clues, Nick reports the development to the police, leading to the arrival of detectives Rhonda (Kim Dickens) and Jim, who jumps to a conclusion that Nick is the principal suspect.

Once it is apparent that Amy isn’t hiding in a cupboard waiting to scream ‘Surprise’, Nick informs twin sister Margo and Amy’s parents, who storm into town from the big city in a frenzy of instant activity, running the show as if their efforts will be graded by people of better standing. Certainly better than the ‘hicks’ in what they perceive to be a backwoods country town.

And just as the investigation builds momentum… I will leave proceedings.

Gone Girl twists and turns like Chubby Checker and is for the most part just as much fun. David Fincher directs without his usual histrionics and camera tricks, sensibly realising that the plot events are more than dynamic enough to hold out attention. (With just a few camera zooms and a synth stab or two this is Days of Our Lives.)

The ongoing investigation is intercut with entries from Amy’s diary, which runs from her initial meeting with Nick all the way to her disappearance.

New characters move in and out of the story. Some are important and lasting, others waft in and are quickly forgotten. Tyler Perry steals scenes as the high priced lawyer who has seen everything possible before – or at least he thought he did.

As a film Gone Girl is more Prisoners than say Gone, Baby Gone, a gritty adult film made with far more restraint by Affleck himself. As a result is always interesting, continually surprising and often more amusing than the subject matter might otherwise indicate.

The acting is fine, the direction reserved (for Fincher), allowing the frankly bonkers story to unfurl, and for us to decide whether or not we are up for the ride.

My wife certainly was, and I was for the 150 minutes. But thanks to an ending that retrospectively poses far more questions than it answers, I wonder just how a second viewing might treat the film.

What I can say is that on first viewing Gone Girl is compelling, captivating and continually surprising, and if you can find the patience for the two and a half hours, an excellent popcorn experience.