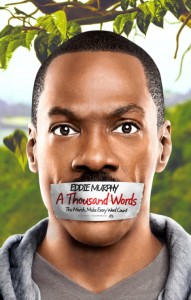 Jack McCall (Eddie Murphy) is a motormouth super-agent who has utmost faith in himself. He never listens to others, never thinks about their needs, doesn’t even read the books that he is to promote. ‘No need’ he surmises, a quick look at the first few and last few pages will give him the gist.

When Jack nails a much coveted client in beloved spiritual guru Dr Sinja (Cliff Curtis), using a blend of bravado and bullshit, his lack of research comes back to bite him when he realises that the good Dr’s ‘book’ is in fact a mere five pages.

Then, in a magic twist, Jack realises that the mysterious tree that has appeared from nowhere in his backyard sheds a single leaf with every word Jack utters – which is a lot – and with no new leaves growing, the ever diminishing foliage comes to represent Jack’s remaining life span.

That’s the set-up. The mystery comes with what will be the catalyst that teaches Jack the secret to breaking the spell, and how sappy the film will get in teaching us the secret of a better life.

The comedy is a little light and the messages a little heavy handed, but it’s actually not nearly as terrible a film as I expected, better than anything Murphy has done since he started voicing that donkey. I wondered how the man who saw fit to waste a bunch of words ranting about his lack of remaining words, couldn’t have thought to spend those words on telling his wife the situation, instead of letting her grow increasingly mystified by his sudden reluctance to fill the air with blather.

Murphy doesn’t push the bulging eyes and pursed lips thing that has become his latter day shtick, nor does he go all Jim Carrey like in fishing for laughs. He gets the chance to throw a few decent lines out and squeezes a couple laughs from the thin material, but it’s a reasonably understated and reserved performance from the man whose career highs left those of Sandler and Ferrell in the shade.

Final Rating – 6.5 / 10. Ironic that a film called A Thousand Words really only needs about fifty to tell you all you need to know about it.

While I try to throw a joke or two into proceedings when I can all of the opinions presented in my reviews are genuine. I don't expect that all will agree with my thoughts at all times nor would it be any fun if you did, so don't be shy in telling me where you think I went wrong... and hopefully if you think I got it right for once. Don't be shy, half the fun is in the conversation after the movie.
View all posts by OGR →
This entry was posted in Eddie Murphy, Film, Movie Reviews, Superstars, The Grey Area. Bookmark the permalink.