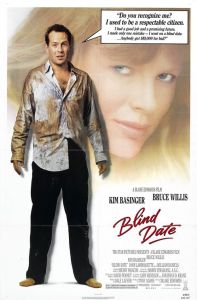 Blind Date is as ill thought out as the titular date that accounts for well over half the running time.

Needing a date for a big work do, over-worked accountant Walter (Bruce Willis) takes a recommendation for a blind date from his brother. The only instruction being ‘don’t feed her after midnight’… I meant ‘don’t let her get drunk’. Which seems sage advice for everyone really.

But even though the advice might make her sound gremlinish, the reality is very different, and very pleasingly curvy. When Walter meets Nadia (Kim Basinger), his initial reaction is ‘what’s the catch’, while hers (and I’m a big Bruce Willis fan) might well have been ‘gee he better be loaded’. Or at very least “Wow I should really stop drinking’.

But if she did stop drinking there wouldn’t be a movie; or it would be 9 1/2 Weeks.

Only that’s where the premise and the creativity stop. Of course Nadia has a sip or two. Of course this gets her rip roaring drunk, bawdy and unpredictable. Of course Walter bears the brunt of most of the shenanigans even though he is really quite helpless and only dragged along in her wake.

This is less a series of jokes than it is a series of strange and unfortunate occurrences, with a tacked on ending to bring things to a pleasant conclusion.

Bruce is in full on Moonlighting mode throughout, with his sideways incredulous expression omnipresent but not much else to do. Kim Basinger is fine as the hot mess, but is similarly restrained by the material and the limitations of the scenario. A similarly lunatic ex-boyfriend is injected to proceedings to provide another counter-point, which leads to the poorly conceived finale, and we lament through yet another 80s film in which Kim Basinger’s hotness seems to be the only calling card.

Final Rating – 5.5 / 10. Anyone who’s been on a blind date would know how excruciating they are. This has all of the awkwardness and none of the laughs.