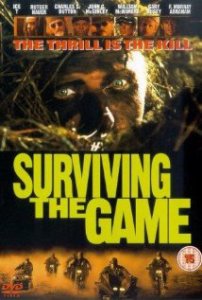 Surviving the Game is a ridiculous one note premise that somehow defies the odds to be mindlessly entertaining.

The key is in the casting. With Ice-T in the lead role as a desperate man with nothing to lose, you have a guy unafraid. With a group of wide eyed crazies including John C McGinley, Gary Busey, F Murray Abraham, Charles S Dutton and the inimitable Rutger Hauer you have something to be very afraid of.

If you were given the opportunity to go for a night on the town with this sextet you would jump at the chance, even if there would certainly be a fourty percent chance that someone would lose a limb that night.

Ice-T is Mason, a homeless man who never had much but still manages to lose it all in one sad night. He is willing to cut bait and end it. One man sees his imminent self destruction. He throws him a lifeline. A well paid job with a vague job description…

A shower, a change of clothes and a helicopter ride later and Mason is in the woods where he meets the hunting party (the six guys listed above) in a secluded cabin. They spend an amiable and pleasant evening chatting and sharing hunting stories, then in the morning they rudely awaken Mason and inform him that he is the prey, and that they will be coming for him after a nice breakfast. Will the person who didn’t see that coming please report to the lobotomy room.

For a pursuit that places a man’s life on the line, the Myers treat it with all the seriousness of a golfing bet. They laugh and joke and poke fun at each other.

Of course Mason didn’t nearly commit suicide to rollover and play dead now, he fights back and the remainder of the film plays out like First Blood with more street slang.

Despite being all too predictable the film manages to rise above to attain guilty pleasure status. Ice-T’s defiantly pithy one liners in the face of death, the long chases through inhospitable terrain, and the inevitability of it all combine to very nearly make the experience worth the arduous and painful hunt for the DVD.

Final Rating – 6.5 / 10. A perfect cast in an imperfect movie. They knew it wasn’t great so they just had some fun. It works best if you take that path also.