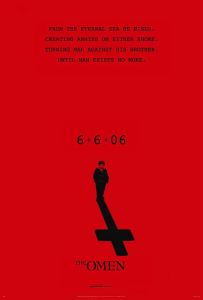 Another fine example of competent unnecessariness. The Omen 2006 is a reasonably note perfect remake of the 1976 classic, only minus a few coats of subtlety to sate the bland appetites of modern day audiences. The end result is a fine where ‘The Omen’ title might be less apt than ‘Gee you guys are ignoring some pretty blatant signs here!’

The Church saw it coming, somewhere in the pages of the texts are references to seven portentous calamities that are said to precede the coming of the End. Six have taken place…

…meanwhile in a small Italian hospital, new Father to be Robert Thorn receives the worst possible news; his new son arrived stillborn. But turn that frown upside down Bob! We have another one just like it that no-one wants.

Years later, Robert agrees to a job change that rapidly turns into a big promotion (due to an unfortunate development). He is now the youngest US ambassador on the books. His lovely wife Katherine (Julia Stiles) is delighted, young Damien – now around 8 or 9 – doesn’t seem to have a facial expression beyond ‘dispassionate’.

The move to the United Kingdom is initially without friction, but it doesn’t last long. The ‘Omen’s arrive thick and fast, with the nanny swan diving from the roof with a noose around her neck after screaming “Damien this is for Yoooooouuu” only the first of a great many.

There are huge black dogs, a creepily perfect new nanny (Mia Farrow), a holy man with a blunt message (Pete Postlethwaite) and a paparazzi whose photos bring more cause for alarm.

But Robert and Katherine remain delusionally stoic throughout, even as their young son finds himself in or near the epicentre of all that is unfortunate. For her part Katherine thinks that maybe she is the one going crazy, while Robert retraces his steps and ponders the series of events that brought young Damien into their lives.

The film delights in trying to replicate the signature moments that made the original film such a standout, without creating a second of new material or a frame of fresh imagery. It’s frankly amazing that a woman who doesn’t seem to move for six or seven years while nannies and housekeepers whirl about her decides to jump on a rickety stool to water dangerously misplaced houseplants but whatever.

I guess if you haven’t seen the first film then there might be some benefit in watching this, but it’s really only a slick and elaborate forgery, with no new material on show.