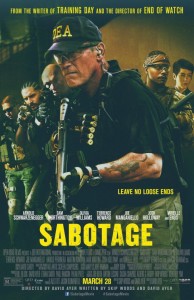 Arnold is Breacher, the leader of a DEA special ops team chock full of hotheads and yahoos, all with similarly cheesy nicknames of their own.

When the team gets a little creative and try to skim a little off the top of a drug cartel cash stash, they quickly find themselves double crossed and cashless. Worse is yet to come, with Internal Affairs tipped off about the theft, and positive that someone managed to get away with the cash.

With the spotlight squarely pointed at Breacher and co, the team is disbanded pending the investigation, which seems to involve little more than weedy corporate glass wearers asking snooty questions to guys and gals who can only reply with assorted ‘Fuck yous’. When that goes as far as you think it might, the crew are stood down at their training base, where they slob about drinking, playing video games and giving each other tattoos.

These are the finest available?

Now out of ideas and tired of paying the group for nothing, the powers that be reluctantly allow Breacher to recommence duties, and a training montage shows that not only is this ‘crack’ squad dangerously rusty, they are argumentative, disagreeable and decidedly lacking in teamwork skills.

They party – at a strip club of course – that night to celebrate once again being professionals. The booze flows freely. The language is salty. The mood combative and the air full of friction. ‘We work hard, we play hard’.

And that very night one of the team shows up dead.

An accident, everyone decides. Just another routine ‘campervan parks on train tracks’ event, happens every Wednesday…

The FBI are called in to investigate. They send in special agent Caroline (Olivia Colman), a single minded operator who won’t be bullied by a bunch of meatheads. They call her a hooker, they demean her openly and when that fails, threaten her. She bites back.

It’s all very testosterone fuelled, and a major failing in the film, which portrays every character in the film in the same light. Everyone is the company’s loose cannon. When everyone is exactly the same amount of different, they are the same. Aside from the various facial hair designs, tattoos and ratty outfits, everyone is equally reprehensible, and within minutes Caroline is merely ‘one of them’, albeit with clearer skin and a nifty pantsuit.

A sole sympathetic character might have been nice, or a jokester, hell even a loving wife at home gently nagging hubby to retire… instead the only guy with a family has had them tortured and killed, and furthermore he maintains the rage by watching video of the event, almost on a loop. Happy times indeed.

Another team member shows up dead, this one a little harder to write off as a mishap. Then another, and you can see where this is headed…

Sabotage is dark, bloodthirsty, nasty stuff. An entirely joyless affair with a mean streak a mile long. As mentioned no-one gets off scott-free, they all slag each other off, punch each other out – and where relevant – shoot holes in bad guys and gals. I have nothing against violence, and certainly nothing against occasional violence for violence’ sake, but the violence here is nasty but dull, and the tween bits aggravating and unlikable.

It’s kinda sad to see what the lure of fame does to people. Even people who were once themselves super famous seem willing to demean themselves in order to potentially reascend to the pinnacle. Arnold Schwarzenegger was a super confident mountain of muscle, ruling the action scene for a decade spanning parts of the 80s and 90s. Now he’s a heavily tatted douche, coddling a group of morons who couldn’t have carried his steroid case a quarter century ago.

Final Rating – 5 / 10. The title Sabotage has nothing to do with the plot of this film, and this film is equally comparable with Arnold’s glory years.