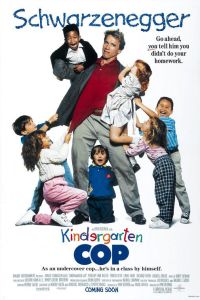 Seconds before the tiny bodies started piling up.

When Crisp escapes imprisonment on a technicality, the police fear that he will try to track down his ex-wife, who has gone underground to avoid his unwanted attention, taking their son with her. The police believe that the wife has taken Crisp’s millions with her, and that he’ll do anything to get them back.

The problem is that while they know where she is, they don’t know what she looks like or what she calls herself, only that her child is of kindergarten age.

With anyone looking like Arnold likely to scare the juicebox out of any four footer the police send in a female cop O’Hara, with Kimble to remain behind the scenes and wait for Crisp to show his huge oily forehead.

But this isn’t any fun at all, and an unfortunate case of food poisoning leaves him no choice but to put on his woolly sweater, sensible shoes and ironed slacks and take on the kindergarten class.

The issue with any movie featuring a bunch of tykes is that prolonged exposure to any child causes either Type ‘Ew’ diabetes due to over-sweetness, or the annoyance generated by their attempts to amuse. This film sensibly avoids that possibility by making all of the kids cute (of course) but doling out the sugar in small doses.

Much of the amusement comes from watching Schwarzenegger make a goose of himself, something he did in many films, but never as effectively as here. We all know the ‘it’s not a tooma’ bit, but hayseed Arnold wearing a straw hat and playing a ukulele never fails to crack me up, and a dozen other moments remain just the right side of cheesy.

Kindergarten Cop also represents the nearest Arnold gets to having a romance, when he takes a shine to fellow teacher Joyce (Penelope Ann Miller) and her young son Dominic. The scenes between the two are well balanced and actually seem possible, despite the fact one is a seven foot Austrian behemoth, and the other a tiny fragile thing.

Aside from a bit of roughness at the opening and closing of the film, Kindergarten Cop is a light comedy with a few laughs and the biggest tough guy of the 90s poking fun at himself. It is by no means a classic, but is the best comedy that Arnold ever managed.